What Amazon shipment got lost on the way? Naturally, this one, when I’ve been waiting and waiting to read it! Of course they shipped another copy overnight — nobody does customer service like Amazon. 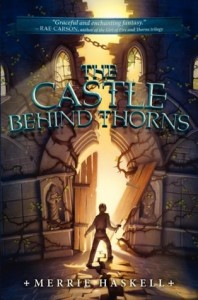 In the room beyond, everything was broken.

The mantel lay in two disjointed pieces on the cracked hearth. Mixed with the mantel’s splinters lay the shattered crest of a great family, their gilded phoenix ad silvered swan once entwined, now separated and dismembered.

The enormous wooden tables throughout the room sagged and slumped like beasts fallen to the hunt. Every bench around the tables lay sideways and in pieces. Each cup and bowl was shattered or smashed. All the tablecloths and tapestries puddled in scraps on the floor or hung in tatters, and even the wood and kindling for the fireplace had been reduced to slivers.

Sand stepped over the broken mantel and crest, shedding ashes on the phoenix’s and swan’s painted feathers as he went.

For now he knew where he had awakened.

He was inside the Sundered Castle.

Merrie Haskell’s tackled what to me has always been a fundamentally boring fairy tale – Sleeping Beauty – imbued it with heart, and brought it to life.

Sand – Alexandre – is a wonderful protagonist. For the first fifty-five pages, Sand is pretty much on his own inside the Sundered Castle. We see the Castle through his eyes; we see the land beyond, Bertaèyn, through his memory. Think medieval France, but a medieval France where evil acts can bring on tremendous curses and where you’d better be careful about praying to saints, because they may be listening. (I loved the saints, spooky as they were.)

Merrie Haskell does lots more research than I ever do, I must admit. The setting has such depth, and I loved loved loved all the practical details about blacksmithing and mending that we get throughout the story, but especially at the beginning, when Sand is alone in the Sundered Castle.

And when the “sleeping beauty” wakes up, well. Perotte is prickly and sometimes difficult and occasionally condescending – she is a princess, after all. She is also, understandably, a bit upset at having been murdered. But I like her a lot, not least because above all, Perotte is scientifically minded. You could hardly find a quality that would appeal to me more.

Perrotte measured the thorns the next day and found that they had retreated a goodly amount. They tops of the castle’s tallest outer walls were now exposed by the shrinking thorn break. Sand found this hopeful. Perrotte reserved judgment.

“It has to be the mending,” Sand said. “So we should just start again tomorrow.”

“No,” Perrotte said, drawing out the word and speaking to him like he occasionally spoke to his little sisters. “Look. The thorns are producing tiny baby raspberries that could be weighing the brances down. So, to test it properly, we have to take a day off. If the thorns still shrink, we’ll know it’s not the mending . . .”

I tell you, I stood up and cheered. Go, Perrotte! I hope she does wind up founding a university for girls; she’ll teach them how to think.

The relationship between Sand and Perrotte is a friendship, not a romance, though one can see the seeds of a future romance have possibly been sown. This is a MG, after all; not likely to be romance-heavy. But this is a story that will appeal to all ages. It certainly appealed to me. CASTLE BEHIND THORNS has it all: graceful writing, impeccable research, and most of all plenty of depth. It’s a story about mending broken things: spoons and buckets and castles, relationships and lives and hearts.

I’ve really enjoyed Merrie Haskell’s other books, but this is my favorite of hers so far. I hope you all read it and let me know what you think!

1 thought on “Recent Reading: CASTLE BEHIND THORNS by Merrie Haskell”