So, CHIME. What do you think of this cover? I think it’s beautiful and evocative: 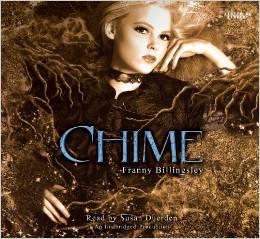 I hate the green cover on Amazon: 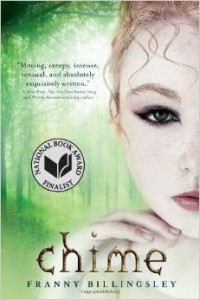 I think one reason I got this in paper is that I loved the cover. If I’d only been able to get the one with the green cover, I’d have gotten this one in Kindle format.

“I want to go home.” My sister turned from the river and closed her eyes, as though she could wish away the river, and the barge on the river, and Eldric on the barge. But life doesn’t work that way, more’s the pity.

But Rose didn’t see. She never saw, not about feelings. “I want to go home.”

Villagers thronged the riverside, but they gave us plenty of room. I’d forgotten that, forgotten how they left a cushion of air around the clergyman and his porcelain daughters. We’d always be outsiders, even though Father’s spent twenty years in the Swampsea and Rose and I have spent seventeen. we’ve never been anywhere else.

“One hundred and eighty-three steps until home,” said Rose.

I squeezed a peek at Eldric as he and Mr Clayborne shook hands. Father was wrong, of course. Eldric wasn’t handsome, not in a Greek statue kind of way, not like Cecil Trumpington, who wants to marry me. Well, Cecil actually wants to marry the idea of me. He wants a girl with ivory skin and corn-silk hair; he wants a girl with the face of an angel.

I’d have to talk to Eldric, wouldn’t I? Talk to this foreign boy-man animal. I knew nothing of boy-men and I didn’t care to learn. And he wouldn’t merely be living with us, but sleeping in Stepmother’s sickroom, sleeping in the very bed on which she had died.

And eat with him?

Mealtimes had been so awkward after Stepmother died and Father started spending time at home again. Neither of us had anything to say and Rose is no great conversationalist herself. We hadn’t had proper mealtimes while Stepmother was ill. Skipping meals is terrifically convenient: it gives one lots of time to brood and hate oneself.

Anyway, I hate cooking and I hate the kitchen and I hate Rose when she begins gulping air; which she was doing now as a way of limbering up for a fit of screaming. I’d warned Father, reminded him that Rose doesn’t like strangers, but Father never listens . . .

At least Rose doesn’t hide what she feels. At least she’s not silent, like Father.

The air shattered. Rose’s scream had begun. The others jumped, then looked about, wondering if they should pretend not to notice. But I was still thinking about silence.

Father’s silence is not merely the absence of sound. It’s a creature with a life of its own. It chokes you. It pinches you small as a grain of rice. It twists in your gut like a worm.

Silence clawed at my throat. It left a taste of burnt matches.

No, our family doesn’t talk much.

This flowing first-person narrative is brilliant, it really is.

I did not like the book at all, and this is true even though the reader can see perfectly well right from the beginning that Briony is a good person, that she is legitimately a hero; that Eldric is an excellent male lead and the relationship between them (my favorite part of the book) is good for them both; that by the end, it will be made clear to everyone that Stepmother was evil and Briony, despite what she thinks, is not.

All this is true, but even so, I didn’t like the book. It was painful to read. Self-hatred is just not a characteristic that appeals to me at all, even when it’s clear that Briony is wrong about everything and that she will realize this by the end. Which she does, there’s no surprise twist to force everything to come out badly after all, thankfully.

I believe this is a book I might like much, much better on a re-read. I suspect that I would have liked it better the first time through if I’d flipped ahead and read the last couple of chapters before I waded through the swamp of the middle. (I don’t usually read ahead, so this didn’t occur to me til later.)

As a book to study first-person voice, well, CHIME is indeed brilliant. I wouldn’t keep it just for that reason unless I suspected I’d like it on a re-read, but it IS brilliant. I’m definitely interested in what Franny Billingsgate is going to do next. Preferably something not set in or near a swamp, and with a good deal less of a slog through self-hatred. In the meantime, I’m curious about her backlist.