O, think upon the pleasure of the palace!
Securèd ease and state! The stirring meats
Ready to move out of the dishes, that e’en now
Quicken where they are eaten . . .
Banquets abroad by torchlight! music! sports!
Nine coaches waiting – hurry, hurry, hurry –
Ay, to the devil. . . .
Tourneur, The Revenger’s Tale

So you probably heard that Mary Stewart has died? It was all over Twitter a week or so ago. She was ninety-seven, I believe. Imagine that. It really is amazing, thinking what the world was like in 1917 compared to today. Wow.

NINE COACHES WAITING was published in 1958. Wow again. Especially when you consider it wasn’t her first book, and her last was ROSE COTTAGE published in 1997. Quite a career.

I first read NINE COACHES WAITING when I was . . . I don’t know, in my late teens, probably, somewhere around there. It was this exact Crest paperback, 50c it says on the cover. Horrible cover. I have no idea who this glamorous blonde is supposed to be, the picture is ridiculously unsuited to the story. That’s fine; I need to buy a new copy anyway because this one is falling apart; it’s held together – barely – by tape. It’s my mother’s book and she never buys a new copy if the old one is still at all readable, so plainly I should get her a new one. The modern editions have much better covers anyway: 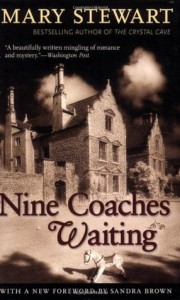 Anyway, I used to like Mary Stewart, but I wonder if I ever knew why? It’s been a long time since I read her romantic thrillers – her Arthurian retelling, yes, I’ve read that more recently, but the others, not for decades, I think. It’s very different reading this book now. I think I know what I’m appreciating about the writing and the story now, whereas when I was in my teens , I expect I knew what I appreciated, but not necessarily why.

Listen to this opening:

I was thankful that nobody was there to meet me at the airport.

We reached Paris just as the light was fading. It had been a soft, gray March day, with the smell of spring in the air. The wet tarmac glistened underfoot; over the airfield the sky looked very high, rinsed by the afternoon’s rain to a pale clear blue. Little trails of soft cloud drifted in the wet wind, and a late sunbeam touched them with a fleeting underglow. Away beyond the airport buildings the telegraph wires swooped gleaming above the road where passing vehicles showed lights already.

Some of the baggage was out on the tarmac. I could see my own shabby case wedge between a brand-new Revrobe and something huge and extravagant in cream-colored hide. Mine had been a good case once, good solid leather stamped deeply with Daddy’s initials, now half hidden under the new label smeared by London’s rain. Miss L. Martin, Paris. Symbolic, I thought, with an amusement that twisted a bit awry somewhere inside me. …

Nice first sentence, and check out how Mary Stewart immediately backs off and leaves the reader asking, “What? Why?” while she sets the scene and introduces the protagonist. The whole introduction is a very nice show-don’t-tell introduction, and right away, on page two, we are met with hints that Things May Not Be Quite Right, as Miss Linda Martin reminds herself that she is supposed to be a proper English governess, that she is not supposed to be able to speak or understand French.

Then the tension ratchets steadily upward for several hundred pages. Right away, we meet the primary villain of the piece, Léon de Valmy. I love this bit:

He was smiling now as he greeted his wife and turned to me, and the smile lit his face attractively. There was no earthly reason why I should feel suddenly nervous, or why I should imagine that Héloise de Valmy’s voice as she introduced us was too taut and high, like an overtight string.

I thought, watching her, she’s afraid of him . . . then I told myself sharply not to be a fool. This was the result of Daddy’s intriguing build-up and my own damned romantic imagination. Just because the man looked like Milton’s ruined archangel and chose to appear in the hall like the Demon King through a trap door, it didn’t necessarily mean that I had to smell sulphur.

Ah, Léon de Valmy! And a very sensible desire not to get carried away by one’s romantic imagination. This is such a perfect Gothic story, it really is, and Mary Stewart had to work hard to counter Gothic sensibility with plain common sense. This is one of those stories where the author might have forced the heroine to be horribly, desperately stupid in order to make the plot work. Stewart managed to make Linda Martin sensible and intelligent. When she has a hard time believing in the murderous plot, it’s because it really is pretty hard to believe that anything like that would honestly be going on. Also, when Linda is suckered by circumstance into believing that Raoul de Valmy is involved in the plot, it’s not because she’s stupid, but because the evidence against him is overwhelming – and even then she mostly doubts him because it’s her duty to doubt him.

Let me just add that I really appreciate the elevation of duty above love in this story. I wonder how many writers in this me-first modern world would handle that dilemma that way?

I had forgotten how long it takes to play out the endgame. The story sweeps the reader along, and by the time we get to the tipping point of the story, the reader is unlikely to pause till he or she reaches the end. I’m surprised to see the “endgame” part of the book actually takes about 100 pages. I think the slow built up makes the hide-and-seek thing seem to move at double time, once we finally get to it.

Also, this time through, I think I was most touched not by Linda’s dilemma regarding Raoul, which is after all required by the plot of any Gothic novel; and not by Linda’s determination to protect Philippe, since any decent person will defend a nine-year-old boy; but by her defense, right at the end, of Héloise de Valmy, who needs but does not deserve kindness . For me, Linda’s interaction with and sympathy for Héloise are what makes her seem like a real heroine and not like a copy of every other Gothic heroine ever.

Overall, very nice writing, good tight plotting with an excellent use of tension, nice characterization. I believe I’ll go on a Mary Stewart kick for a while; these are just about perfect to revisit now, when I am busy enough that I don’t really want to read anything new-to-me. I’m glad to be reminded of them , though sorry it took Mary Stewart’s death to remind me.