Okay, my connection from home is starting to get iffy. Spring! Leaves on the oak trees! So internet on the weekends, not so much. Just FYI.

But! Yes, I did finish the basic draft of KEHERA. Finished it May 1st, so right on schedule. I do want to read through it from top to bottom, cutting and tweaking and probably adding a very short Chapter Eight, and I think that will take about a week. But I think I will let it set for two weeks first. So my schedule for May is:

a) Read things for a week.

b) Write 20-25 pp of a different work-in-progress so I can send the first 100 pp of that to Caitlin and see what she thinks — this will be the first time ever for sending smallish chunks rather than a complete rough draft. Not sure whether how I’ll feel about that.

c) Read through KEHERA and polish that up and send it to beta readers.

d) Read things for a week.

That will take me to June, and I will need to write the rest of the other WIP by August 1st, so yeah, busy summer. I don’t expect to get through very much of the ever-expanding TBR pile this year. I won’t be so pressed for time next year (probably).

Meanwhile! Honey won the points on Friday, but alas, a different girl won on Saturday and a different one again on Sunday. Still! She only needs four single points to finish. This coming weekend she and Kenya will be showing up near Chicago. It will be a smaller show, but it is still a major on Saturday (not Sunday). If Honey wins both days, she will be finished (with her championship, that means). If Kenya wins both days, SHE will be finished. I would not object to one of them winning one day and the other the next day, but alas, other girls are entered, so it is possible of course that neither of them will win either day and the whole drive will be for nothing. I must say, performance is less stressful, since whether you qualify or not is basically up to you and your dog, not the judge.

Meanwhile! My brother visited this weekend with his new puppy, Patience. 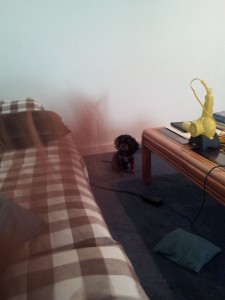 I enjoy this picture because of the red ghost of Folly, who was jumping off the couch right at that moment. Anyway, Patience is SO CUTE. She is half the normal size, maybe even less, but her structure is quite lovely. She stands in a stacked position all the time, so you can get a decent look at her, and since she doesn’t have the puppy-fluff thing going, you can see her properly. Her chest could be deeper, but it probably will deepen as she grows up. Her bite is iffy, but it’s gone back and forth and will most likely correct eventually. Meanwhile, she is perfectly adorable. Their other Cavalier is rather big for the breed, incidentally, so quite a contrast.

Anyway, on with Monday! I am going to read Cherryh’s PEACEMAKER today and tomorrow. I notice that she has felt compelled to include an appendix in this one, catching the reader up to what’s been happening. I do like how she put the appendix at the end because it’s out of the way and unobtrusive if you don’t want to bother, but there if a reader is actually just coming in to the series now and doesn’t want to back all the way up to the beginning. Mind you, I think the best way to read this series is from the beginning. But I get that this would be quite the project.