Here are a couple of upcoming May releases that caught my eye because:

b) I know both authors personally, and

You can take that as a full-disclosure statement if you like, but believe me, if I didn’t enjoy their books, I would never say I did. Plainly Caitlin has excellent taste in the writers she signs, because so far I love the books written by her other clients.

So, anyway, before it gets completely buried by other posts, here’s an excerpt of STRANGE COUNTRY by Deb Coates, over at tor.com. 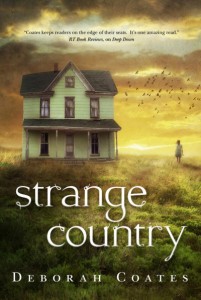 Another great cover for this series. I am kind of into covers-without-people, so I like this a lot.

So far each book has been self-contained, so I don’t know whether Deb has a fourth book planned, but I’m not too worried about the possibility of cliffhangers. Also, though I really liked both the first and second books, I preferred the second, so I’m eager to see what Deb has done with the third.

In the comments, we’ve seen some mention of “unlikable” female characters recently. This series is interesting to me because some readers find Hallie unlikable. I like her a lot, personally. Would this be considered dark fantasy? It may be a tad darkish, but I would categorize it mainly as contemporary fantasy and let it go at that.

I haven’t seen anybody else comment about the subtlety with which Hallie’s father is handled, but he is one of my favorite secondary characters. And of course I love the setting.

Okay, the other book I have in mind, coming out the same day, I believe (late May): 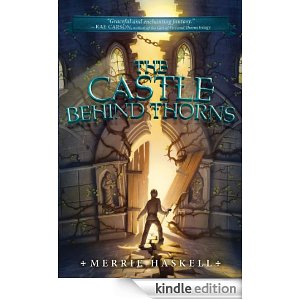 I really enjoyed THE PRINCESS CURSE — I think it made my top-ten list the year it came out, and if it didn’t, it was a close contender. I also enjoyed HANDBOOK FOR DRAGON SLAYERS, though not quite as much. But! CASTLE BEHIND THORNS is my favorite book by Merrie so far.

I am very, very eager to see this final version of CASTLE BEHIND THORNS, because I read a late version in draft. I had one problem with a character’s actions at one point toward the end of the story and I am very curious to see what if anything Merrie might have changed there.

I have mentioned this before, but this is the one where Merrie Haskell has only one character on stage for a large chunk of the book. That sure presents unique challenges for the author! It works beautifully in this story.

Obviously this is a Sleeping Beauty retelling, you got that from the title, right? It is a must-read if you like retellings, and don’t we all?

Anybody else excited for anything in particular that’s hitting the shelves in May?

7 thoughts on “A couple of May releases —”