Okay, first, this post, at Persephone Reads, about a narrative nonfiction book, WASHINGTON’S SPIES, about . . . get this . . . Washington’s spies. As in, the Washington, and the men he set up to spy on the British during the Revolutionary War. 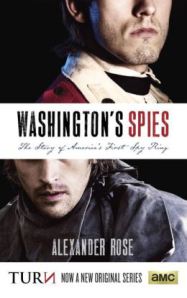 Chelle says, “Talking with my father about reading this book, I was prompted to admit to being overtaken by one of those slow-blink moments of realization: George Washington was a living, breathing person. That sounds strange. Here’s the thing: In my imagination, Washington was never more than that silent stoic and mostly static figure seated on a horse in EPCOT’s American Adventure. He was, I don’t know…like plastic….”

This book evidently succeeds in bringing Washington to life. And his spies. I think I am going to have to read this. I love a story that really shows me a period of history, makes it seem alive and real. Thanks to Chelle for the tip.

Second, over at Books Without Any Pictures, a review of STOLEN SONGBIRD by Danielle Jensen. 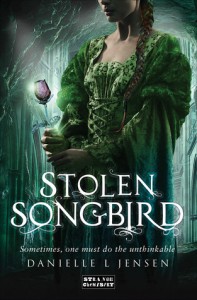 I’ve seen brief mentions of this one on Twitter, plus one or two reviews, but Grace’s review is the one that made me add the book to my wishlist. It’s a recent debut so I will probably go ahead and pick it up in the next couple of days. Always nice to support a debut author if you can.

This is a troll story, very similar in basic outline to Dunkle’s THE HOLLOW KINGDOM. I really enjoyed that one, but had significant issues with the forced-marriage trope, which did not seem to me to be presented as a truly problematic plot element. I’m thinking I might like this one better.

Grace says, “And then there’s the fact that the entire prophecy/destiny thing doesn’t go according to plan. It’s almost a trope in a lot of fantasy novels that you have a character with a special destiny who has a mission to change the world. Here, you have two characters with an obvious destiny, and they’re forced together in the early chapters of the book to break a curse and it doesn’t work.”

It doesn’t work? Really? I think that’s rather fabulous. You know my post the other day about things I’d like to include in a future book? Another is: a prophecy that doesn’t come true.

Also: pretty cover. I’m a bit tired of the cut-off face closeup and I’m not a fan of the ballgown girl covers, yet this one really works for me. I haven’t priced this and might get it as a Kindle book, but if I get the paper edition, it’s one I would turn face-out on the shelf.