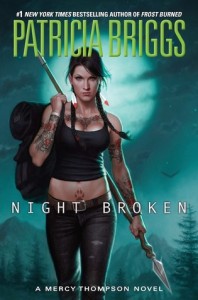 I liked it. It didn’t seem as big and important as some of the other recent Mercy Thompson books — it was basically a monster-shows-up-we-must-kill-the-monster story. But I liked it quite a bit. In some ways I think I liked it because it didn‘t try to do big things.

Big things I would have hated: If Christy had managed to screw up the relationship between Mercy and Adam, I would have been furious. I appreciated Briggs deliberately making it clear this wasn’t a problem whenever the reader might have started to get worried. I did not want a relationship-gets-screwed-up story, even if the relationship got straightened out at the end. So: Briggs made the right call on that one, as far as I’m concerned.

Big things I would have liked: More stuff to advance the fae-at-war-with-US plotline that got started in a previous book. Yes, there was a nudge in this direction, but plainly that was a set up for a future book. The thing with Beauclare (the Gray Lord who got pissed off and declared war, if you don’t remember) is plainly in this book to reassure the reader that Briggs hasn’t just forgotten about that, but nothing about that plotline was actually necessary for this book. I mean, Briggs worked that in so it is connected, but only as a nod to plot coherence, rather than as essential to real plot coherence.

Things I was not happy about: Most authors do not kill dogs. In this one, Briggs kills a lot of dogs. :( Worse, she sets it up so the dogs’ owner is forced to kill his own dogs. Doubleplus :(

Things that compensated for the above: That set-up sure explains why Joel could tear himself free of the monster’s influence given half a chance. Talk about motivation.

Things I don’t understand: I have seen various commenters who declare that all the woman characters in this series are bitchy, mean, petty, etc except for Mercy herself. Fine, but this complaint should not apply to Christy, who has been presented that way from the start — it is important to establishing Jesse’s relationships with her dad and with Mercy and I thought Briggs was actually a bit nicer to Christy than she deserved.

But complaining about all the other female characters is becoming more obviously unfair. Surely no one can miss how Honey is a female character — and a feminine woman character too, no grease under her fingernails — who is also being developed into a real character with brains, strength, and complexity. I love the direction Briggs is taking with her. I always thought Honey had it in her! Go, Honey! I am absolutely certain Honey is going to get more and more important to the pack and play a major role in upending certain not-very-nice pack traditions.

Things I do understand: I have seen various commenters who have been left with a very bad taste in their mouths regarding various other members of the Columbia River Pack. Well, no kidding. Bad show by all kinds of people who should darn well know better. If they don’t know better now, there’s just no hope for them.

Final thoughts: A solid and enjoyable story. I’m looking forward very much to seeing where the series goes from here.