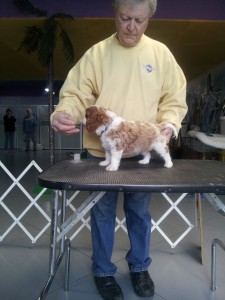 This puppy almost has it all: proportion, topline, angulation, bone, movement. Also a fabulous temperament. Also, after a mere two days of misunderstandings and tears, he now reliably trots over and uses the pee pad I put in the living room, thus requiring essentially no supervision, thus becoming reliable at slightly less than eight weeks old.

Marks against him are minor: he has slightly high tail carriage. He has two tiny, unobtrusive freckles between his eyes. His pigment could stand to be darker, and the pigment of his sclera could also be darker. All of this is minor. He could definitely be a future AKC Champion and I think it’s possible he might even have a shot at earning a CKCSC Championship.

Alas, he is also now officially late in bringing down his other testicle. Two more weeks are all I’m giving him, though yes, I know, the other one COULD come down in a month or two or three. Ten weeks already implies a problem, and a problem that is rather likely to be passed on — and I hate to hold onto him, hoping, and at six months finally conclude that no, it’s not going to happen. Especially when a wonderful family is waiting and hoping he will be theirs.

So this little guy may be one of those truly fabulous pets who will turn heads, and would turn more heads if everyone knew Cavaliers well enough to recognize his sheer quality. Two weeks, and we’ll see.

If I keep him, I will breed him probably twice.

If I don’t keep him, I don’t know if I have the fortitude to try again. But I can see myself trying just One. More. Time. to get the perfect male puppy. Except I am not a very emotional person in general, but I can tell you, I have not even begun to recover from losing that little girl.