Well, it’s sort of spring, more or less. I suppose. Like this: 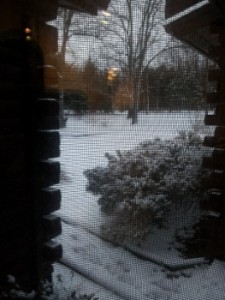 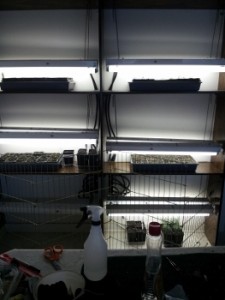 Spring outdoors vs spring indoors: This was actually last Sunday, the snow didn’t last, but you get the idea. But by late March, I have faith in the idea of spring, thus starting seeds. These are petunias (about fifty), annual vinca (about a hundred and thirty, you can never have too much vinca), melampodium (about thirty and then I ran out of seeds, but this was a great plant for me last year, both resistant to drought and immune to deer), a handful of eggplants and peppers, and four rosemary cuttings that I started under lights last fall in case the big plant outdoors died over the winter. Which, given our winter, I expect it did.

I still want to start these little marigolds I like, with tiny single flowers, and maybe this and that, but not juuuust yet. Some annuals do better planted out when they are still tiny, like just-three-leaves tiny. Even with the petunias, I started them six weeks “late” by the book, because somehow I am expecting a cold, lingering spring and though petunias are tough, I want them small and non-flowering when I put them out, if possible. And Melampodium is not at all hardy (it says on the packet) and needs it warm, not iffy.

Meanwhile, here is a plant that has already flowered this spring: 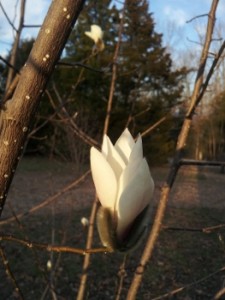 Anybody recognize this? At least by family?

This is a Yulan magnolia. Most magnolias flower when they are little tiny babies, but this particular tree is twenty feet tall and this is the first year it flowered. So naturally the flower buds opened and we instantly had snow and temps that dropped down to 27 F. So tedious and annoying. Pity the Yulan wants to flower so early. Even the ordinary saucer magnolia was only just barely cracking its flower buds, though it might have gotten zapped, too, I’m not too eager to walk down there and view the damage.

Well, we accept these risks when we plant magnolias, I guess. All my other magnolias are still wisely zipped up tight — the star magnolia and the stellate x loebneri cross and ‘Elizabeth’ and ‘Ann’ and ‘Butterflies’ are my other spring-flowering magnolias. I hope they have the sense to wait till about mid-April.

Magnolia sieboldii, btw, flowers in midsummer, so if you are not into risks but do love magnolias, that is one to think about. Mine is still tiny, but put a handful of blossoms on last year. And of course the big southern magnolia flowers in the summer as well, but it is a Real Tree and not something to plant in a tiny yard. Plus it doesn’t really put on a big show because it opens fewer flowers and not all at once. Also, I’ve seen some young southern magnolias that died outright this winter, though I think ours is okay. It’s established and also a more cold-tolerant variety.

Next week I bet the daffodils will be flowering. That will really mean it’s spring — even if it snows again.