Wow, I’m glad I set Flannery’s post up in draft form last night, because quite a morning! Rush rush rush, I tell you, and I do get up really early, so that is not usually how my mornings go. But! All is well, because here we are, only a few hours later than I intended.

Now, Flannery posts over at The Readventurer, and I’m glad to see that it looks like she’s going to start posting more regularly again. Plus, obviously, a guest post right here! Flannery is one of the original AKH fans PLUS you will notice she gets credited for AND ALL THE STARS, which I loved, so good job with that!

So, welcome, Flannery! And I hope you’ll all enjoy reading her post as much as I did.

When Rachel Neumeier asked if I would write a blog post about Andrea K. Höst for a dedicated week to the author, I quickly replied that I would. I am, after all, a gigantic fan of Andrea and her work. The problem with my snap decision is that I haven’t been participating much online lately, nor have I been writing (m)any blog posts or reviews. My fingers feel a bit rusty on the keys. However, if anything can divert me from watching John Mulaney’s New In Town on Netflix for the tenth time, it’s writing an entire post about what a badass I think Andrea is. Although she’d probably prefer not to fill this particular position, Höst is the self-published author against whom I compare all other self-published authors. She is absolute proof to me that an author can conceive of fantastic stories and characters, execute beautiful writing, edit, edit, edit, and deliver fully-formed books without the interference of a third-party publisher. Of course, I am not deluded enough to think there are no third-party interveners from when she writes the first draft until she puts it up online, but she is the end-all in terms of all aspects of the books.

You know all those posts out there in the web that weigh in on the pluses and minuses of self-publishing? You know the ones I’m talking about, they often (but thankfully not always) say something like “people who self publish are the ones who can’t get their books published any other way, blah blah blah.” Well, Neumeier gave me free rein to talk about Andrea in a blog post, so here is my overall thesis: I sincerely hope Höst never goes the traditional publishing route. If she did, I have a terrible fear that her books would become something other than what they are. They are exactly what she wants them to be, and that’s the way I love them. In a creepy “the future is now” type of way, I can technologically track my interest in her writing back to its onset. The first of her books I read was Stray, book one of the Touchstone trilogy, which I read with another blogger friend from Goodreads. The review that got me interested was this one, which was written by an Argentinean Goodreads friend of mine. I enjoy/ed giving him a hard time about his penchant for buying only the cheapest ebooks available, but his random find and subsequent praise-filled review were enough to snag me. I realized at that point that I had purchased Stray from Amazon during one of its many freebie periods and it was lingering like hundreds of other books I’ve collected on my Kindle since 2009. My readalong buddy and I kept a Google doc of notes that I just went back and read—all 30 pages of them. It is 100% true that I was into it from the beginning and that continued throughout. Cass Devlin is smart, resourceful, funny, and logical, which is a surprisingly hard to find combo. When she is thrown into a completely unknown situation with mostly just her wits, she tries to figure out how time passes, how to get food, make shelter, how to deal with her period, how to protect herself. She is just so darned practical, and I loved her for it. After reading through my notes, and reading the review I ended up writing, I think the original bar chart I made for my review is true for Höst’s work overall: 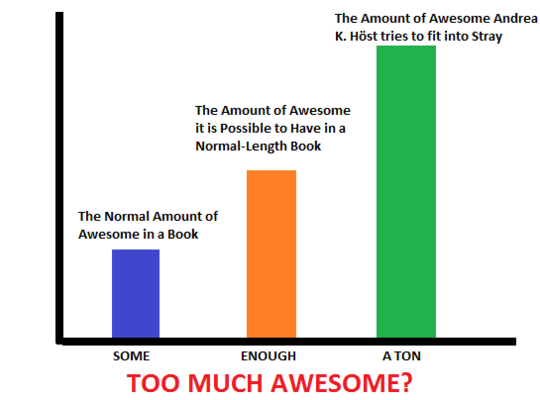 At the time I originally wrote my review, I thought that Stray needed to be edited down a bit because there was just so much going on. After reading two more of her books, I think the amount of ideas that must be in Andrea’s head is insane. Some authors take years to develop worlds as complicated and intricate as the ones she imagines up. There is a lot of description, but not in a Tolkeinesque let’s-describe-each-rock-the-gang-encounters type of way, more in an I’m-excited-about-what-I’m-writing-and-can-visualize-every-inch-of-this-world kind of way. Not description of random pieces of nature, but instead description of underlying systems and worldbuilding, which doesn’t always work for me as a reader but totally works for me in terms of Andrea’s writing. In a total reverse from what usually happens, I think I enjoy her books even more as time passes.

Though I have so much respect for Andrea as a writer, I think my positive feelings arise equally from the way she presents herself online. She blogs about her writing, tweets about her interests, and participates often as a reader. (something I know Neumeier also does well) She wrote a two-part primer on Agatha Christie and similar mystery authors for my blog that still gets lots of traffic to this day. After my friend and I read Stray, we chatted off the record and on the record (well, on Goodreads) about how we would absolutely love it if Andrea wrote a survivalist story, and the craziest thing happened. Höst somehow took the wishes and dreams of some random people on the internet as inspiration and turned them into And All the Stars. In less than a year.

I’ll take that blame and wear it as a badge of honor, thank you. Though I have absolutely no data to back this up, it feels to me like she is slowly gaining the popularity that I think she deserves. Of course, this week of blog posts about her and her work is a lovely tribute, but I couldn’t wipe the smile off my face when I recently went into a branch of my library system (the busiest in the US), and saw Stray on the front display, just hanging out with some other recommendations and new acquisitions. And it wasn’t me who harassed them to buy it! (If anyone did at all. I have a suspicion it was brought on by favorable reviews and And All the Stars being shortlisted for the Cybils and nominated for the Aurealis Awards) 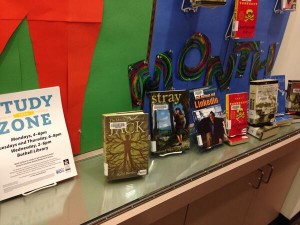 If you look at WorldCat for And All the Stars, it looks like there are eleven US libraries that have at least one copy in circulation. For a self-published author, I think that’s amazing. Of course, many libraries can’t afford to keep books on their shelves if they aren’t routinely checked out, but I periodically keep tabs on them when I am placing holds and there are usually one or two of her books checked out.

You might think, considering how much I admire Andrea’s work, that I’d read all of it. Well, I haven’t. I’ve only read four of her books. I guess I am practicing delayed gratification as I’m fairly sure I will love them all. Even if I don’t, I’m positive there will be an excessive number of awesome ideas jam-packed into them. Tiny bits of characters, worlds, and plotlines that will make me wish that all of her books were made into television shows. Since I know she’ll be reading this (rambling, mostly nonsensical) post, here are 10 things I’d love to read about in an AKH book:

1. A female fighter pilot (in space or on Earth or somewhere else!)
2. Some sort of convoluted prison breakout
3. A futuristic (probably female, definitely not asexual) Sherlock Holmesian character
4. The Australian outback as a setting.
5. Building a colony/city/town from scratch
6. Somehow working this place or this place into the plot

I lied. I could only think of 6 things off the top of my head.

Dear Andrea,
If you could go ahead and take one of those tidbits and change it completely into something amazing and yours, that would be great, m’kay?

Sincerely,
One of your biggest fans,
Flannery

Thanks, Flannery! And if I get to vote, I totally vote for a convoluted prison breakout. That is a trope that really works for me. Can we get everybody else on board and put some pressure on AKH for that one? Because I’m sure she doesn’t have anything like enough ideas to work on already, right?