I was going to put in another guest post today, but actually (clears throat) I only just finished *my* post for this week, making me the very last person to meet this particular deadline. And then my post proved to be too long. So I have revised it into two posts, of which this is the first.

So! A guest post again tomorrow. But here is the first of two from me, and if the week stretches out a trifle, fine. 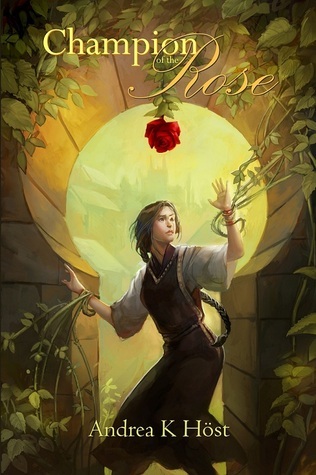 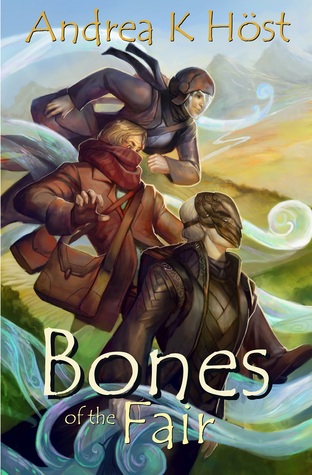 For me, the first book of this duology was fine, but I preferred the second.

I enjoyed the set-up of the situation with the Champion, though – I mean, how would you like to be chosen as the King’s Champion almost literally because of your pretty face? Against not only your wishes, but also the king’s, because it’s a kind of curse type of thing that does the choosing and there’s nothing either of you can do about it?

I like how determined Soren is to really BE the King’s Champion, despite her fury as she figures out how the curse has worked. I like how Strake is determined to be the best king possible, despite circumstances that are really just beyond difficult.

Not to mention the other curse. This one: “You know, when sunlight at just the right angle picks out all the dust in the air? It’s there all the time, but usually you don’t see it? Well, he was there all the time, standing in the middle of the yard. Whistling. He moved away and – it was very fragmentary, the image, as if he was walking between the moonbeams. I don’t think I saw all of him, all at once, but I saw enough.”

Darest is quite a country for curses. It’s the Fair, really. I can’t say I would want those people for neighbors personally. Though the Rose, no. The Kings of Darest did that one to themselves. Quite a problem for Soren and Strake when a magical thing that was supposed to protect Darest takes on the wrong kind of life of its own.

But the thing is, my favorite character from the first book is actually Aristide Couerveur. I love the situation he’s in, and how he deals with it, and keeps on dealing with it because it’s not the kind of situation that actually has an end.

And Aristide Couerveur doesn’t get to be a main character till the second book.

Yeah, the second book: Bones of the Fair, which just came out last year. For me, that’s the one which is the must-read.

How to describe Bones of the Fair. Let’s see. Okay, try this:

In Bones of the Fair, Gentian Calder is in a difficult position.

She has been in self-imposed exile for years, but longs to return home. But when she’s home – when she’s anywhere in her home country of Darest – she wakes up every single morning at dawn in the grip of a terrible nightmare. If she tries to stay awake through that moment, she’s first compelled asleep and then blasted out of slumber by this nightmare. She’s suffered this curse since birth.

Even so, she’s determined enough that she’s come home anyway, drawn by a hope that now, following the events in Champion of the Rose, things might be different.

She was wrong. The curse is still right there.

Aristide Couerveur is in a difficult position. He always knew he would eventually rule Darest – until suddenly, against all possible expectation, the true king returned (in Champion of the Rose). Now he knows he will never rule, because rebellion against the rightful king would tear his country apart. He can’t do that. Instead, he’s determined to do everything he can to make sure Darest prospers. This will be tough, since the country is actually still under a curse. Or maybe two curses. I did say this was a bad country for curses, didn’t I?

Half of Darest’s neighboring countries have suddenly found themselves in a difficult position. Their various rulers aren’t necessarily eager to explain to the king of Darest just what all their heirs were finding to talk about while they all attended a little boating party right at the border of Darest. But certainly none of them expected all those heirs to suddenly vanish, caught up in a strange and terrible curse that may be just about to reach out from the past and shatter Darest.

Okay, so, read the book, right? Start with Champion of the Rose, sure, but even though it’s self-contained, definitely continue with Bones of the Fair.

Aristide Couerveur is, as I said, my favorite character from this duology. I could talk about him all day. But not just yet. Instead, I will bring him up again, later in the week, in a post on the heroic tradition in Andrea K Höst’s fiction.

8 thoughts on “Recent reading: Champion of the Rose and Bones of the Fair”