Okay, people, let’s start with a guest! My first guest for Andrea K Höst Week is Estara, who has been that best and most cherished sort of reader for Andrea — the enthusiastic reader who pushes books on friends, acquaintances, relative strangers … everyone, really. Estara is so far ahead of me with Goodreads reviews that I know I’ll never catch up. Welcome, Estara! 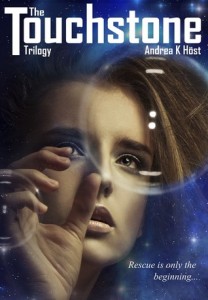 I walked into adventure and adventure has given me blisters.” — STRAY

What can I say that Rachel and the Booksmugglers haven’t said more eloquently about the appeal of Cassandra Devlin and her way out of her normal life as a teenager in Sydney to find a place , as well as a chosen family & friends for herself on a world not her own (I was going to say odyssey, but Ulysses gets back, eventually – Cassandra doesn’t, and it’s stated very clearly she wouldn’t even if she were offered the chance).

Not much, to tell the truth, so what I will try to balance here is why this particular series of Andrea Höst’s works so incredibly well for me in all kinds of situations but particularly when I’m under stress in real life. When I first discovered it, I had to read the full series (ALWAYS with the gratuitous epilogue included) four times that year – I’ve since restrained myself to three times a year, except in especially harrowing circumstances…

Now I’m pretty sure the fact that I tend to jump into a story and immerse myself in my reads to the extent that a lot of the finely crafted details pass me by is fairly helpful in keeping the story fresh for me – this has always been the case for me with reading and over the years (I’ll be 47 this year) the books that stay on my shelves are the books I reread. Books I haven’t reread after a certain amount of time are gotten rid of.

So even after the 8+ reads I’ve done of the series so far I still find subtle emotional shifts and hints between the characters or explorations of the idea of what it realistically be like if you had such advanced nano-technology that “always online” wasn’t a choice but a part of your identity as a person.

But the quote I picked out at the start (which quite a few people have picked out on Goodreads) is probably why I opened my heart to Cassandra even when she was wandering through the wilderness trying hard not to panic: she reflects on herself and her situation (the fact that the whole series is diary entries makes that very clear and easy to follow) but she never lets herself be intimidated into freezing or giving up for good.

Now, to be sure, I agree with Thea that we readers only get half the story of the true horrors, and as Cass herself says: “I’ve never been the type to keep a diary, so this pile of words is strange to look back over. The first thing which leaps out is how calm I sound. That’s a big bluff. I just haven’t written down all the shouting and crying I’ve done. I don’t want to write pages about how it feels to wake in the middle of the night, stiff and cold in my grassy nest, to listen to SOMETHING moving around in the dark and hope that if it bites I die quick.”

What we get is quite enough for me, thank you very much, I’ve got a lovely visual imagination and especially the Ionoth and the fights in the Ena or against those massives (while certainly making good tv-fodder, as Tare media has realised for years) are gruesome enough for me. The labrat situation that lends the name to the second book and especially the incredibly well-described teleporter-tag which Cass has to survive in that book read intense enough for me after the fact, because Cass’s voice speaks to me – many reviews have pointed out that this will be the deciding factor for the reader.

Fortunately AKH is aware of that and the previews at Amazon or Smashwords, particularly of the Trilogy edition, allow the taste-tester to really decide well in advance of a purchase of whether Cass’s voice works for them. We get the dialogue filtered through Cass, as well – although the instant replay ability of the nanotechnology everyone is implanted with actually makes it believable that Cass can quote people word-for-word and realize subtle developments on second viewing which passed her by in the moment itself.

This way I can believe her portrayal of the clueless experimentation partners who have no idea of what she is and what she can do but develop into individuals during her constant contact with them – and the work Cass puts into making them respect HER as an individual (to enable ensuring her survival, an increase in personal freedom and eventually a community worth living and fighting for) – is true to the people she meets because the diary is for her, first and foremost, for a long time. It’s her sounding board when no one understands her and it helps her structure her impressions.

And that’s why I never feel that Cass is the God-given savior of her new world whom everyone loves and adores – men and women both (although it turns out that she is a catalyst for sure) which can make me get a stale after-taste when I come across such a character – whether male or female: she struggles and keeps on struggling and so do her Setari friends, even when the most obvious crisis is over (check out the Gratuitous Epilogue) not only for happy end but also for lack of privacy and problematic public interest and fear of Cass & Co.).

Reading her trials and triumphs just encourages me not to give up myself, when I am in a situation that feels unbearable at the time – especially regarding work-related stress – and so I recommend this to other readers who love her voice as a book to reread repeatedly. You’ll probably find more amazing bits and pieces than you got the first read-through, too.

Personal ties: what clinches my love for Cass and why she continues to inspire me, even at my age (and I cheer for her realizing her dreams, even when she had to scrap the old ones she had back on earth).

“I blame Doctor Who. Mr Spock. The Scooby Gang: both the ones in the Mystery Machine and the ones with the stakes. I’ve spent my life with stories of people who don’t walk away, who go back for their friends, who make that last stand. I’ve been brainwashed by Samwise Gamgee.” — by far the most liked AKH quote on Goodreads

Books have influenced my own development at least as much as my parents and school did, and continue to do so. And if you read through Touchstone, you’ll see that books, even the Tare version of books, get mentioned again and again and media in general help Cass orient herself in her new world – even as the problems of reality tv series based on her life get shown in a realistic light, as well.

Romance: [cut and paste into the linked translator if you want to see this spoiler-quote!]

It took me three years to confess my first crush to the intended person. I was 18 when I managed it ^^ – late bloomer, I know. This is exactly what I would have done, had I been in Cass’ shoes and why I totally felt for her embarrassment when it looked like the dream experiences went both ways.

Thank you, Estara — and I agree with every word. The Touchstone Trilogy is one of those rare stories where I read the whole thing again right after I finished it the first time — and I just re-read most of it again a month ago. Cass’s voice is awesome. And that coding a spoiler thing is awesome. I’ll have to figure out how to do that myself.