Have you all ever read anything by Chuck Wendig? I mean posts at his Terrible Minds site, not fiction; I don’t think his fiction sounds like my kind of thing (it sounds like horror or perhaps very very very dark fantasy and I’m not inclined to get within a hundred feet of it) (If I’ve got it pegged wrong, let me know). But his blog posts are a) almost always funny and b) rather crude, just so you know if you click through, and c) frequently spot-on about whatever topic.

He has a long post about self-published books which is worth reading because it’s funny and probably at least partly spot on, and he starts it thus:

“I do not hate self-publishing and I am in fact my own author-publisher on a number of releases, and will continue to be so. I am in fact one of those “hybrid authors” you keep hearing about, which means I have fins like a dolphin and claws like a badger and I can both play the violin and kill with my mind. This is not a post bashing self-publishing, but rather a post that aims for critical awareness and constructive thinking.”

Which sounds promising. Am I going to suddenly be able to play the violin and kill with my mind after I self-publish something, which I want to do, probably later this year?

Anyway, it’s a long post, in which he makes these points, among many others:

a) in the United States alone you have about 300,000 new books added per year to the traditional pile, and Bowker claims the number for self-publishing is somewhat higher (~400,000 in 2012) if you count them by ISBNs, and many self-published authors do not use ISBNs, so when you add in other countries and territories, you could be looking at twice or more of that number.

This is obviously both YAY! and OMG! because it’s so completely plain that you will never, never, never find even a fraction of the books you would most love. And the reason you won’t find them this year or next year or the year after that is because discoverability is so impossible. Here’s a tiny bit of what Chuck says about that:

b) Given that word-of-mouth still requires some genesis in discovery, let’s talk about one’s experience when going to browse an online bookseller to discover new work.

Oh, jeez, sorry! I tried to browse Amazon for new books and found myself plunging into a nightmare of noise and garbage.

Chuck actually thinks Amazon used to be easier to browse. If so, I missed that. I think it is impossible to browse online. The very closest you get is “if you liked this, you might like that”, and that is not at all close. And it doesn’t even matter how easy Amazon is to browse, because are you kidding me? 800,000 books (or more) per year and all the books published in all the earlier years that keep piling up, and there is NO WAY anybody can possibly browse. Hence, discoverability is THE issue. Especially for self-published authors because so few blogs / pro reviewers / libraries / bookstores / etc are willing to even glance at self-published work, and who can blame them, because 800,000 books! Per year! Is too many and everyone MUST have a gatekeeper to sort this pile before they look at it. Chuck says:

c) I was once open to self-published authors sharing this space [on his blog], but when I open myself to that, it’s like trying to get a sip of water from a water fountain and getting a fire hose instead. A fire hose that shoots sewage. . . . these books. These books. And these authors, man. … So, what I get is: a bunch of ugly books with quality issues pushed forward by unprofessional authors. Now, that’s by no means all of what I get from the self-published, but it’s at least half of what I get from them. And here someone is going to say, “Well, I’m sure you get the same from the authors with big publishers,” and here is where I say: not once. Not ever.

And thus Chuck Wendig concludes that the pile o’ slush is not harmless, because many avenues of discovery are closed to self-published authors because nearly everybody gets very tired very fast of the fire hose that shoots sewage. Then he winds it up by offering potential reactions to the problem, many of which are awful but I could certainly imagine them happening, such as Amazon segregating self-published work into a different search engine, and just imagine what that would do, burying gems that are self-published in a pit that no one would ever in a million years want to look at. Which is where they are now, mostly, but not as deeply and uniformly buried as a policy like that would bury them.

I don’t have any. Except: Once a specific person discovers a specific book, an awareness of that book can ripple outward via personal recommendations, until not only personal friends but also bloggers and reviewers and so forth start to pick it up. For example, Bibliotrophic has a perfectly clear no-self-published-books policy, but here is a recent review of Andrea Host’s AND ALL THE STARS at Bibliotrophic.

Social media probably helps with this, because I expect other reviewers’ enthusiasm for AND ALL THE STARS encouraged Bibliotrophic to make an exception.

But social media isn’t a perfect solution, because (as Chuck Wendig also points out) book recommendations that you see on social media do blur from signal into noise. It’s not that I don’t trust the taste of (lots of) the people I follow on Twitter. It’s that all of them are recommending books all the time, and unless someone says just the right thing about a book (Foodies will love this wonderful alternate-China fantasy! Wonderful sibling relationship plus dragons!) or specifically directs a recommendation right to @rachelneumeier, I am not likely to pay that much attention.

This makes me sad because I assume that most of the people who see recommendations on Twitter for MY books also don’t pay that much attention, but it also seems inevitable.

I will say, when someone *does* direct a recommendation directly to me, I pay attention. So that makes me happy, since I trust everyone has the same reaction on those rare occasions a friend specifically recommends about one of my books.

The amazing ease of giving books as gifts via Kindle may help, too. I’ve started to simply now and then send a book I love to someone I think will also love it, because that makes almost no difference to my overall book budget (huge compared to a normal person) and the prices for ebooks are often fairly low, and I just enjoy doing that. My bet is absolutely all of a person’s friends and acquaintances will pay attention to a gift dropped onto their Kindles (ie, pure signal, zero noise for this particular method of calling attention to a book you just fell in love with).

Which is a very long way of saying that I just discovered a new author whom I think is self-published, because of a direct personal recommendation from a frequent commenter (Thanks, Elaine!). 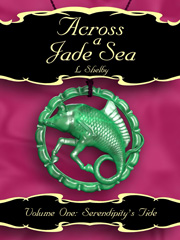 I loved this book, and also the second in the series:

Which should be read as a duology. You can expect a review to appear in the next few days, but I will say that to me the third book — while fun and worth reading — felt rather like an extended epilogue. Not that there’s anything wrong with that, because I love epilogues. I mean: plan to buy the first two and then if you love them, which I think you will, then buy the third.

The other warning I’ll offer right now is: these books were far, far too distracting for me and I have gotten nothing useful done for the past couple of days. Don’t start the first unless you have time to finish both it and the second.