I noticed a new post over at Chachic’s Book Nook,about great fictional couples. I have the first Lupi book on my Kindle and I really want to read that this year, which will leave out only the Ruthie Knox title. I like the foodie aspects of that one, so maybe I’ll pick it up, too.

Of course I’m especially happy to see Natividad and Ezekiel on the list, even though their relationship is still, um, in the process of being defined. It is just killing me not to tell you all whether and how it works out between those two in the sequel. I am sure you mostly do not actually want to know ahead of time.

I do want to mention a handful of the fictional couples I like best, though — and a handful of my favorite non-romantic relationships, too, because it’s way too late now to call this a Valentine’s Day post, so why stick to romance?

But, as romances, here are some I really enjoy:

While we’re on Bujold, how about Miles and Ekaterin? A perfect couple, right? And A CIVIL CAMPAIGN is practically a perfect book, too.

I’m going to continue to nudge everyone who loves Kaoren Ruuol and Cassandra to try to find a copy of An Alien Music, because I bet you will love Jesse and Ben Hammond.

I really love the slowly building relationship between Benjamen January and Rose in Barbara Hambly’s series, starting with A Free Man of Color.

And one I may not have ever specifically mentioned before, but which works wonderfully well: Wen and Jasper in Sharon Shinn’s Fortune and Fate. 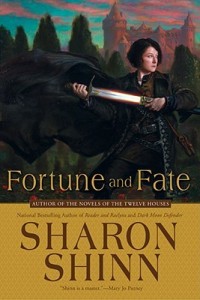 That story is linked to the Thirteen Houses series, but is fairly independent and certainly can be read as a standalone. Of course Shinn almost always uses a lot of romance tropes when she writes, you probably already know that, but this particular story is one of my favorites of hers. I particularly love how Wen is the physically competent swordswoman and how Jasper is the bookish guy, and how they really have to work at understanding one another. Seriously, romance lovers should try this one — so should people who enjoy non-romance fantasy, because there’s plenty of other stuff going on in this book.

There is a particular exchange in Fortune and Fate which really resonated with me, too — this arises from the backstory — where Wen says to someone, “I just don’t know how I can go on after that.” And he answers, “But, Wen, you already have.”

I read that scene several times. It still leaps to my mind whenever I think of this book. I just think that line really captures a kind of day-to-day endurance after tragedy, that turns imperceptibly into the rest of your life.

For non-romantic relationships, it’s hard to beat Alan and Nick from The Demon’s Lexicon by Sarah Rees Brennen, don’t you think?

You know I have also just re-read (most of) the Touchstone Trilogy, and I’m so impressed by the relationship Cassandra builds with those kids, especially Ys. One of the best mother-kid vibes out there, even though the age difference between Cassandra and Ys is not really all that huge. They’re only about nine, ten years apart, but Cassandra is such a great mother for those kids anyway.

And, back to Sharon Shinn, I really loved Adele and Eleda, the mirror twins in A Truthteller’s Tale. A thoroughly charming story, beautifully put together, I really should re-read that, too. So many books, so little time!

One more, though I think it’s cheating to reach out of the literary world into TV, but still. I really appreciate the relationship between Veronica Mars and her dad, which to me was one of the strongest aspects of a show that had a lot of strengths. Even I am looking forward to the Veronica Mars movie, and I normally don’t care very much about movies. (I don’t have anything against movies, really! I just would normally rather read a book.)

How about you, any particularly favorite couples or other relationships that leap to your mind?