I’m glad to say that Maureen loved BLACK DOG. “I loved Natividad and Alejandro and Miguel, and I found their story extremely compelling.” Good! That’s what I like to hear!

“But even more than that, I found the way religion and magic interact to be completely fascinating. I liked that they aren’t shown as necessarily antagonistic–the emphasis is much more on whether you’re a moral person. This is a perspective that isn’t often shown in fantasy, and I liked the understated way it’s portrayed quite a bit.”

That’s the first time someone has commented about that, and I’m happy to see this aspect of the world getting some appreciation, because I think it worked out pretty well.

My favorite line: “Tumultuous backstory without a lot of angst and single perfect tears? Messing up but also trying really hard? So much more interesting than characters who moodily mood about.”

Which made me laugh! Moodily mood about! I am totally going to steal that phrase and use it forever to describe over-the-top angst.

Plus, giveaway! You should click through, especially since the post above her review of BLACK DOG is worth reading. It’s about “books with all the feels.” Who else loves a book that makes you cry?

I’m also going to steal her graphic because it’s perfect: 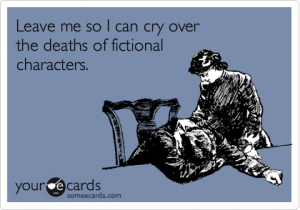 Which makes me try to think of the fictional character whose death made me cry, but right now all I can think of is books where a character’s death just tore up the protagonist, so I was really crying over the grief of fictional characters. Like THE SKY IS EVERYWHERE, an amazingly intense and wonderful book that is a great read even if you do need a whole box of kleenix to get through it.

Puppy update: Boy 2 might be doing a little better; it’s hard to tell. I wish I could say he had definitely turned around, but no. I can and will tube feed him right up to weaning if I have to, and then we’ll see.

The other two puppies are JUST FABULOUS. 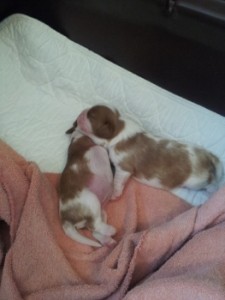 This is big Boy 1 trying to smother his sister in her infancy. He just tipped over a pound. If this was my H litter, I would be calling him Hippo.