I’m fascinated by the variety of sounds newborn puppies can make. It’s a longer list than you might expect, considering that happy puppies are very quiet. Like this:

Tiny little occasional purrs and cheeps: I am happy, comfortable, and as awake as I can be considering my brainwaves at this age are the same whether I’m awake or asleep.

Louder, more persistent cheep-cheep-cheep: I’m lost! I’m on the wrong side of mom and can’t find a nipple!

One sharp CHEEP: I was asleep and someone startled me awake.

Muffled eeeh-eeeh-eeeh: Mom rolled on me! Get her off me!

Loud, angry, persistent CHEEP CHEEP CHEEP while nursing vigorously: Mom doesn’t have enough milk! Feed me! (I haven’t heard this with the current litter; they are a quiet bunch. Of course, I supplemented a lot the first day or two. Giedre’s milk is fully in now, and I think I’m about done supplementing.)

A cold puppy really will die, too. They are right to sound panicked. A newborn can’t control its own body temperature and must be kept warm by its mother or a heating pad. If chilling doesn’t kill a puppy outright, it’ll be terribly susceptible to pneumonia afterward. You can see the remnants of wild instinct in the way a mother will tuck herself tightly around her puppies to keep them warm. I honestly am amazed that canid puppies survive in the wild. Those wolf mothers must be really, really obsessive about keeping their babies warm.

Infectious disease is scary, but the two things that mostly kill newborn puppies are trauma and chilling. This is why I sleep right next to the whelping box for literally weeks, until the puppies are too big to be lain on and much more resistant to getting chilled. Quite a few puppies are lost to smothering, but not MY puppies. Even more are lost to cold, but again, not mine! They have a normal body temperature by the time they are three weeks old — and they are also safe from some of the scariest infectious diseases at that point. I always breathe a sigh of relief when we make it to 21 days.

This is my tenth litter. For those of you who can count to the letter “I”, it’s the tenth, not the ninth, because I lost the only surviving puppy in my first “F” litter when he was three weeks old, so I used that letter again later. Anyway, the point is, I now find that muffled mom-rolled-on-me wakes me up instantly — Giedre rolled on a puppy last night — but I barely notice sharp he-shoved-me-off-a-nipple cheeping.

The babies are doing great! If I supplement at all today, it’ll just be for Boy 2 if he shows any signs of stalling. Girl has gained more than an ounce over her birth weight and is now the second biggest puppy, a hair bigger than Boy 2, who started higher but has gained only half an ounce. Boy 1 is still the biggest, obviously, though he also is just half an ounce over his birth weight. 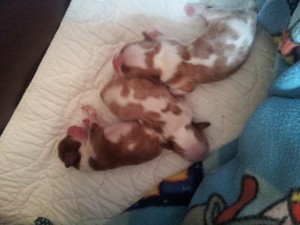 Girl is the dark one on the bottom, Boy 2 is in the middle, and that’s big Boy 1 at the top.

1 thought on “A lexicon for newborn puppies”