So, check it out! The BLACK DOG blog tour has officially begun!

I have a guest post over at The Bibliophibian, where I pick out my top-ten shapeshifters. Click on over, see what you think, and add any can’t-miss shapeshifters I didn’t include in the comments. I’m sure there are plenty, because it turned out that I sure haven’t read as many great shapeshifter books as I thought, recently. They have kind of been stacking up on my wishlist / TBR pile instead.

Also, don’t miss the giveaway link down at the bottom of the post.

In other news: Giedre is doing much better now. She started feeling more comfortable yesterday afternoon and I only barely remembered to give her the pain pill this morning. Probably not coincidentally, her mothering instincts came in at about the same time and she is now a good mom. 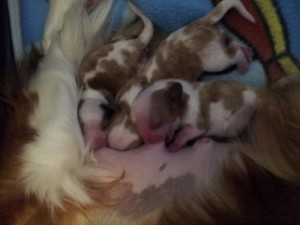 That is Girl on the left, Boy 1 in the middle, and Boy 2 on the right. Boy 2 really is a bit pinker on the head (and feet) than the others, and Boy 1 really is the least pink, though he is cheating by tucking his head down so you can’t see his nose. Pinkness has to do with how well developed each puppy was — it’s simple lack of hair — and Boy 2 was the one who stalled out, you’ll remember, so he had about 24 hours less fur growth than his sibs. The top of his head actually looked patchy when he was born, but the coat in that area is more even now.

All of the puppies have started gaining weight: Boy 1 is not up to his birth weight, but he is coming up from his low of 7.55 ounces. Now he is 7.75. I will keep supplementing him if he starts to slide back down or fails to gain, but I think he will probably start gaining today, and gaining well, oh, maybe tomorrow.

Boy 2 never lost much, yay, and is now over his birth weight, though barely. I don’t think he’ll lose now, but he has been slow to start gaining. If he doesn’t seem to gain through the day today, I’ll keep supplementing him, too.

I did say Girl was a go-getter, right? Girl started at 5.5, fell to 5.35, and is now up at 5.95. I gave her just a couple cc’s of supplemental formula at midnight, but only because I was doing the boys and thought what the heck. I suspect she will not be the smallest puppy by the end of the day. In the boys defense, Girl was really skinny when she was born, so just plumping up to match Boy 1 will close the gap quite a bit.