So you can expect me to stop obsessing quite so much. I am much, much happier with them out here where I can take care of them myself. 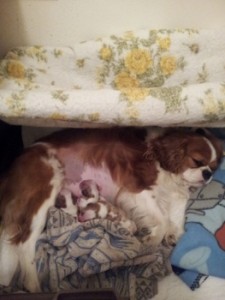 There were only ever three puppies. I must have been hearing the one in the rear equally loudly from both the left and the right — Well, Giedre is not very thick through there. On the other hand, I really thought one must have died in there, so hey, three! Yay!

The puppy in the rear started to show a serious decline in heart rate yesterday afternoon, which is why I thought one had died, since one dead puppy can compromise the uterine environment for others. My vet was reluctant to take the puppies three days early, because that could have been a disaster, as all three puppies might have been too premature to survive. But that one in the back would not have lived through the night, so I went and got them.

This was the right decision! There are two boys and a girl.

Boy 1 — 8.0 oz, a really impressive size for a premature puppy. Hair right down to his toes. He barely looks premature at all.

Boy 2 — 6.0 oz. This was my problem child. He is a decent size, thankfully, but if you look closely, you can see he is not quite as well developed as the others. I have no idea what pulled him down, except that those early contractions may finally have compromised his placenta. He was slow to nurse, but tube-feeding him a few ccs of sugar-water pulled him around.

Girl — 5.5 oz. I am glad the girl is the smallest, since mostly the girls are more vigorous! 5.5 is actually very good for a preemie. She is a little go-getter. I really like her! She has an extra-strong nursing instinct, very good to see in a little puppy. She was skinny at birth, though. If she was as plump as Boy 1, I think there would be only an ounce between them instead of two and a half ounces.

All three puppies are basically doing fine. They have all lost a little weight, which is not abnormal. All day today I will be supplementing with 2 to 3 ccs apiece of formula diluted with sugar-water, every two hours. I would like to see their weight stabilize by tonight. I will say, Honey lost 11% of her birth weight and took four days to get back to her birth weight — and she was fine. She looked fine the entire time. I don’t see any reason these puppies shouldn’t be fine, too. Preferably without losing more weight or being so slow to start picking it back up!

The Whelpwise people have been fantastic. Karen swears we can get these puppies gaining by tonight. We’ll see!

Okay! A bit less important than being alive, but: All the puppies are nicely marked.

The cosmetic features become visible in this order:

About two weeks: eyes open. All of them will look like they have white sclera for a while. As the pigment darkens, you can see if any will truly be stuck with an (incorrect) white sclera in either eye.

About three weeks: teeth come in. It is hard to assess bites on baby puppies, and bites can change, but I will be anxiously looking for underbites. With three nicely-marked puppies, well, surely at least one will have a perfect bite?

About seven-eight weeks: you get someone to help you stack each puppy and evaluate structure. There is NO REASON Giedre’s puppies should be less than excellent. But I will sure be wanting to get a good look! Structure isn’t really a cosmetic feature, because soundness is very important, but I threw it in because it is very important and not obvious at birth. Gay tails — tails carried high — are sometimes cosmetic and sometimes indicate a structural fault. I would like to see nice tail carriage in every puppy.

By the way, Giedre is not super happy. She is having more pain than some, poor baby. Of course she is on puppy-safe carprofan. I think she will feel much better in a day or so. She, being a Cavalier, is happy to lie quietly and let the puppies nurse. She has no real mothering instinct yet, though, and is not cleaning the puppies, so that is my job. I’ve never had a bitch who didn’t eventually start taking care of her puppies, but I’ve had it take five days. Crossing my fingers Giedre will not take quite so long to realize she has puppies!

A friend of mine with an early section for her Kuvatz? She had to muzzle her bitch and physically pin her down to let the puppies nurse. I’m glad I have Cavaliers.

8 thoughts on “Puppies have been achieved”