Because Liz Bourke has a review over at tor.com. 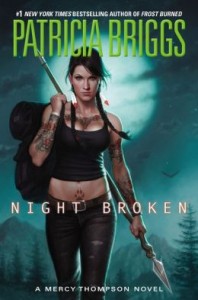 Liz finds this one a solid installment overall, but she is not too keen on the annoying-feminine-woman trope that appears in this book, in the person of Adam’s ex:

“Well, it plays into a pattern that frames women as competing with each other for men, or that frames one woman as maliciously jealous of another over a man. A pattern, moreover, that values femininity less than it values competence in traditionally masculine areas of enterprise. Christy is feminine in traditional ways, and is a weak selfish person. Mercy is not feminine in traditional ways—in many ways, she’s “one of the boys”—and is a strong good person. It’s a narrative pattern I find pernicious, and one that sets my teeth on edge.”

Fair enough, and come to think of it there really are a lot of female characters in this story who are just not . . . just not . . . ah, I have it. They are not nice people. They are not good people, either. Bran’s wife, say. I like Honey, but only sort of; I would like to see her develop in interesting, complicated ways and so far she just hasn’t. What’s the name of that woman who got suckered into Paul’s get-Mercy conspiracy? Not that she is a typical feminine woman, so there’s that. But, yeah, there are not very many nice women in this series. I could do with Mercy having one or two solid woman friends, including, yes, traditionally feminine women.

It’s true that Christy was already presented (in absentia) as shallow and selfish. But it might have been nice to make her more complicated and maybe more sympathetic once she stepped onstage. Mind you, I will forgive this flaw because I really love the series overall.

You know who’s good at taking a character (male or female), presenting them as selfish, cruel, or whatever, and then bringing them onstage and turning that initial impression on its head?

Got anybody in mind?

Barbara Hambly. It’s something she does often enough that when I read the first “Barbara Hamilton” mystery, having forgotten it was really by Barbara Hambly, I pegged it as one of hers because of this exact trick. And her writing style, yes. But I was sure because of this trick with character. I will just add, in case you decide to look up these mysteries — with Abigail Adams as the protagonist — they are good as historical novels, but the mysteries are not very mysterious. I don’t much care about that, but just in case that bothers you in mysteries.

4 thoughts on “Hey, everybody else is also eager for the 8th Mercy Thompson book, right?”