This caught my eye because AC Gaughan’s SCARLET is a book I really want to get to in 2014. I really love the Robin Hood story, always have, and yes, I know, Robin Hood is hard to do well and retellings usually have problems, particularly with the ending.

Assuming you all read Robin McKinley’s version back when it came out, what did you think of that one? Because I really enjoyed it. It’s my favorite retelling so far. But I didn’t like the way it ended — BUT I do think it is VERY HARD to do the ending of a Robin Hood retelling. I didn’t like the way the original story ended, either, at least not the version I read as a kid. I’m pretty sure I have never liked the ending of any Robin Hood story, ever.

So, anyway, SCARLET by AC Gaughan. 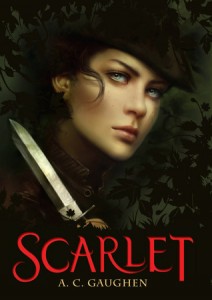 I don’t think there’s any need to worry about this book’s ending, since I get the impression we don’t get to the ending in this book anyway. Though that just pushes off the problem, of course. Still.

In SCARLET, We’ve got a girl dressed as a boy — you probably know that. That’s a plot element I often enjoy. No doubt you recall that McKinley did that, too, though not with Will Scarlet, and I enjoyed it in her book as well.

Ellie’s review isn’t the first rave I’ve seen. I’ve got this one on my Kindle, I’m pretty sure — unless that is SCARLET by Marissa Meyer, which would be fine, since I want to read that, too. (I could go check, but I’m too lazy to get up and go in the other room and get my Kindle.) I think I would prefer a Robin Hood retelling to a Red Riding Hood retelling — though of course it really depends on the actual story, so I don’t know.

If you retroactively define my reading goal for 2013 as “read through a lot of the extensive backlist of a handful of great writers”, I did that. But it didn’t leave much room for other (hopefully also great) authors. So I think my reading goal for 2014 is to read a lot more new-to-me authors. I’m still surprised I could come up with only eight new-to-me authors for 2013. Eight! Not very impressive.

And after reading Ellie’s review, I’m tempted to start with retellings of folktales and fairy tales that happen to be titled “SCARLET”.

7 thoughts on “Book Revels: SCARLET … plus a new year’s resolution”