I knew RIVER OF STARS would be broad-scale and epic. But I was in the mood for something like that, after reading one or two short, fluffy books.

I also knew it would be really, really well-written and beautiful. Again, I was in the mood for that.

But I didn’t realize it would be a tragedy. 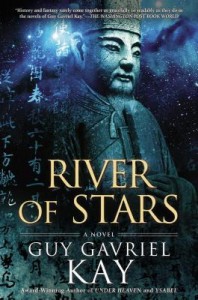 RIVER OF STARS is set in a land and era inspired by the Song Dynasty of China. Those of you who know one Chinese dynasty from another would no doubt have realized that RIVER OF STARS was going to be a tragedy. Me, I just know that there were a lot of Chinese dynasties, but I don’t know their order or main events, so I didn’t realize this.

Despite the beauty of the writing and the story’s excellent, sympathetic protagonists, I was forced to maintain an emotional distance through the whole novel, because the story of a great nation brought down by barbarians, unnecessarily, because of the sheer vanity and unbelievable incompetence of its leaders was just painful to read about. Kay does not do grimdark, so fortunately the reader is spared intimate, detailed descriptions of the pillage and destruction. But still.

I know that from time to time in the real world a great nation really does just step over the edge of a cliff, apparently voluntarily, and plummet down into ruins and flames. I know that the utter incompetence and vanity and greed and blind commitment to unbelievable stupidity of those at the top can shove a great nation right over the edge, even if the great mass of people are trying to claw their way back up. It happens. I know that. But it is still painful to watch those events unfolding. And to see that at the end, the new Emperor is just as bad as the old — ruled by fear, ready to throw his own people to the wolves and betray the one man who saved what’s left of the Kitai Empire . . . really. It’s painful.

I would gladly nominate RIVER OF STARS for 2013 awards. It is a brilliant novel. But I will also give it away, because there is no real chance I will ever want to re-read it.