I rather like the Deborah Knott mysteries, which I just started reading this year. Or last year, whatever, it all starts to blur together a bit by December. 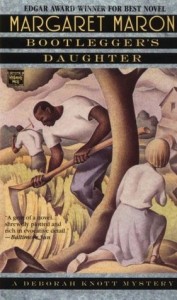 BOOTLEGGER’S DAUGHTER is the first in the series, but actually, I started with SLOW DOLLAR and have gradually made my way forward in the series; hence I’m on WINTER’S CHILD, my fourth foray into this series.

I like the characters, including the vast extended family of our protagonist, Deborah Knott. Especially her father, who, yes, used to be an infamous bootlegger and, I gather, never got caught. (I like him a LOT.) I also like the somewhat unusual romance that started in SLOW DOLLAR and took a couple of books to work itself out, where the marriage was proposed as a marriage of convenience but actually he was always in love with her but she never knew and then she develops true feelings for him and . . . okay, probably you don’t need the whole relationship arc. But it is very different from the Instant Realization That (He) She Is THE ONE that we find in, say, Laura Florand’s romances. Obviously I’m not knocking those, I’m sure you know that, but I definitely enjoy a relationship that is slower to develop.

I like the setting for these mysteries, too. Bootlegger country (or it used to be); small-town. I like that Judge Deborah Knott is a minor court judge, whatever that is called, I mean the kind of judge who hears DUI cases and cases involving teenage vandalism and whatever. Little stuff, low-profile stuff, nothing involving celebrity lawyers and flashy crimes. I like the everyday feel to the stories, the ordinary people who move through them.

And until now, I believe I’ve sort of liked the mysteries themselves, though to me the mystery is always definitely secondary to character and setting. Which is a good thing, because I did find myself sort of rolling my eyes a bit at the mystery in WINTER’S CHILD.

Let me see, when someone kidnaps an eight-year-old, and that person
a) is mistaken at a distance for the kid’s mother,
b) the kid is seen to go with the kidnapper a bit reluctantly, but more or less willingly,
c) the dog does not bark and alert the household when the kidnapper comes back to fetch the kid’s teddy bear (!),
d) the kidnapper appears to enter the house easily and repeatedly, and seems to probably wear gardenia perfume, known to be favored by the women in the family,

Then naturally you would immediately suspect:

But, no. It was the sister, who turns out to be actually schizophrenic and delusional. She thought she was protecting the kid. I feel just fine revealing this to you all BECAUSE IT IS COMPLETELY OBVIOUS.

The possibility does not even dawn on the protagonists until p. 220. (I made a note.) They have to almost literally be whapped over the head with a two-by-four to figure this out.

Sigh. It’s a good thing I don’t primarily read mysteries for the actual mystery. Or the suspense. It never crossed my mind that the kid might be harmed. I’ll just go on with the spoilers and let you all know that indeed, the kid is just fine.

This is the last Deborah Knott mystery I have, and certainly the least impressive I’ve read to date, though I did enjoy it. Now I have to decide whether to go back to the beginning, or go on. I’m leaning toward trying the first book. It probably has a bigger role for the father, who is a fabulous secondary character.