Here’s an interesting post about alternate history, over at Fantasy Faction.

The post points out that creating a point of divergence is easy, but developing a rounded story from that point is difficult.

Let me just mention that if you want to see a set of fully-developed worlds based on alternate histories, you could do worse than to look up the GURPS Alternate Earths supplements. 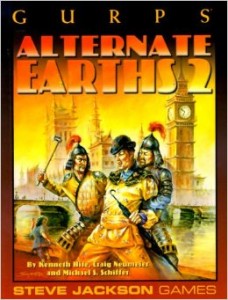 These are fun to read even if, like me, you are neither a gamer nor actually planning to write an alternate history. I mean, I guess BLACK DOG is an alternate history in a way, because supernatural stuff has been influencing history all along, but really it’s not — there’s no point of divergence or anything.

Craig says that you can make absolutely any alternate history seem inevitable if you do it right. The scenarios presented in these GURPS supplements totally establish the truth of that claim.

Craig, the author of the linked post argues that JONATHON STRANGE AND MR NORRIL by Suzanna Clarke is the best-ever alternate history. Since you’ve basically read all alternate history stories ever, which one would you vote for?