I’ve recently been entertaining myself with a new cookbook: 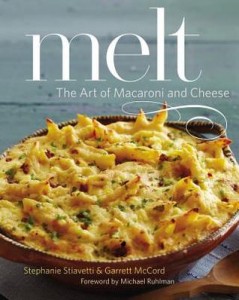 Well, it was written by a couple of bloggers, including Stephanie Stiavetti of The Culinary Life and Garrett McCord of VanillaGarlic. So one expects a certain zippiness of style, which MELT delivers. Like this, about Buffalo Chicken Macaroni:

“Plus,” [Stephanie] insisted, “it would taste outrageously good.” I thought the idea had all the charm of a dilapidated Hooters bar . . .”

Obviously Stephanie won, right? Because here is the recipe after all. I haven’t tried it, but it sounds pretty good. Though it involves a CUP of buffalo wing sauce, which must pack quite a wallop.

Plus, no question about it, this is a beautiful book, and beautifully designed. There’s an inviting paragraph or two about every recipe, and plenty of pretty pictures, so you could find yourself kind of inclined to try this one . . . and then this one . . . well, fine, winter is a good time for pasta dishes, right?

Sections are sensibly arranged, with one on pasta salads, then dishes made completely on the stovetop, then baked dishes — like that. Paneer, pineapple, and cucumber pasta salad? Sounds good, but definitely not for December. But here’s a stovetop dish with scallions and artichoke hearts; that sounds really good. And a cauliflower and gruyere macaroni gratin sounds inviting, too.

Now, you should keep in mind, this is all about gourmet mac ‘n’ cheese. Some of the ingredients are definitely not in my mother’s kitchen. Or even mine. I do have truffle oil. But I had NO IDEA there was such a thing as chocolate pasta. Who thought of that one, I wonder? Come on, tell me you’re not tempted to find some. I bet you can order it online.

There’s an extensive explanation of types of cheeses, as you’d expect for a book this specialized. I have to say, wow, there are a lot of specialized artisanal cheeses out there, and they are very, very pricy compared to normal supermarket cheeses. Stiavetti and McCord use them freely and give references so that you could track them down, and I did some looking, and wow. Lots of them are in the $35 per pound range. I may try one or two of those . . . sometime . . . as a special treat.

This cookbook is definitely geared toward the urban gourmet foodie crowd. People who are tempted by radicchio and edamame and Brussels sprouts as well as chocolate pasta and cheeses with names like “Honey Bzzz”. I’m kind of a foodie, and actually I am dying to try a cheese called “Honey Bzzz”. But frankly I’m not even sure where to get edamame and . . . well, I’m sure radicchio is tasty, if you, you know, develop a taste for it.

What proportion of recipes in this book would normal people find tempting? Normal people who do cook, but who can’t afford $35 a pound for cheese, plus shipping because they don’t happen to live in an urban area?

I’m guessing the answer to that is about 50%, maybe even more, but you have to be willing to take the recipes down a notch. Thankfully, Stiavetti and McCord do offer suggestions in each recipe for more normal cheeses along with the artisanal varieties. And lots of the recipes feel approachable. Chili-Mac with Smoked Cheddar? Who wouldn’t like that, especially in the winter?

Anyway, as a public service, I tried out some of the recipes with ordinary cheeses. This, among other things, led to my discovering that I really like gruyere (I sort of thought I remembered hating it, but that must have been some other cheese. Or a past self with different tastes.)

So, for example, I tried Montgomery Cheddar Macaroni with Baked Apples. I used 20 oz of ordinary cheddar, the sharpest I could find in the store, and, as directed, 6 oz of gruyere. This was — you can probably see this coming — very, very rich. The apples were totally necessary to cut the richness of the macaroni and cheese and even there, I definitely would suggest small servings.

And I know I made something with gouda. Oh, right, it was this stovetop mac ‘n’ cheese with gouda, golden raisins, and pine nuts. Yeah, I remember that, all right: I burned the pine nuts and was really mad and threw them out and used walnuts. I don’t know why I was so mad, I like walnuts better anyway. But it was good. Of course, I already knew I liked gouda, and I do like golden raisins in things like this, usually. Again, small servings, here.

But for me so far? The clear winner so far is this recipe, which I will give here, with comments, and I hope Stiavetti and McCord don’t mind.

16 oz fettucine
12 oz cream cheese
1/4 C mayonnaise
1 tsp mustard powder
1 tsp smoked paprika (I just gave the last of my smoked paprika to my mother, so I used Aleppo pepper)
1/2 tsp cayenne
1/2 tsp sea salt (I left this out and didn’t miss it, even though I like salt)
2 cloves garlic, minced
Zest of 1 lemon (I left this out, because I had zested this lemon days ago for something else)
Juice of 1 lemon
1/4 C milk
1/3 C dry white wine (I left this out and added the liquid from the canned crab)
2 Tbsp Worcestershire sauce (sigh, I was out, and used a bit of fish sauce instead, which I don’t actually suggest, but that’s what I did.)
3 scallions, sliced
1 lb crab, fresh or canned
8 oz Rogue River Blue cheese (or gorgonzola)

Now, let me smooth out the timing for you, which will mean taking ingredients out of order.

Do you have your scallions sliced? Do that first and set them aside.

Zest and juice the lemon.

Mince the garlic and set that aside.

Open the cans of crab.

Measure out the spices and put those aside.

Now you’re ready to whisk this together in no time and get it on the table. Me, I’d suggest a green salad or something to accompany this dish, not that I bothered, but if you’re going to make something like that, do that first or delegate it to someone else, because this dish is going to come together fast.

Okay, get a big pot of water boiling and in the meantime set a pan over low heat or over a double boiler. Drop the fettuccine in the boiling water and cook for 12 minutes, and if you are brisk about other tasks, you can pretty well prepare the sauce while the pasta cooks. Like so:

Put the cream cheese and mayo in the pan over low heat. The authors suggest a double boiler. I have an induction stovetop and set the heat at 4.5 for a bit and then dropped it down to 3.5 and had no trouble. I cook rice at 2.4 if that give you an idea of temperatures for my stovetop.

Anyway, added the spices and garlic and stir until the cream cheese is melted. Add the milk, lemon juice (and zest, obviously, if you have that), and wine, if you’re using it. And the Worcestershire sauce. Whisk until smooth. Add the scallions and crab and whisk again. You want it hot, but not boiling. Boiling, as you no doubt know, is not good for lemon juice.

Just about at the time the sauce comes together, the pasta will be done. Dump it into a colander and then divide between serving bowls. Ladle on the sauce and sprinkle an ounce of gorgonzola over each serving; toss. You want the blue cheese to sort of melt into the pasta without being fully incorporated.

This was really good. I would definitely try this again — with smoked paprika and lemon zest, but probably not the wine, which I don’t think I’d like here. I’m not a big blue-cheese fan, so if you’re not either, you might like to know that this really was good, but I think the sauce would be quite good without the blue cheese, too.

Anyway, now I really ought to go wash the dishes.

Also, I should add, the authors did send me this cookbook, not exactly in exchange for a review (there were no quid pro quos suggested), but naturally, that was their reasonable expectation. So, here.

2 thoughts on “While on the subject of food —”