So, Out of the Easy. 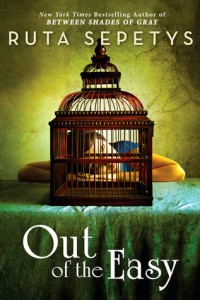 What an interesting story. A little out of the ordinary for me: the setting is 1950s New Orleans, which I sort of perceive as almost-but-not-quite contemporary, if that makes sense. Honestly, I usually prefer my historicals more historical. But setting is important to me in a story, and I love the 1830s New Orleans presented to us in Barbara Hambly’s outstanding Benjamin January series, so I thought I might enjoy Out of the Easy as a different look at New Orleans. I was right, though I will admit that in practice the semi-familiar world of the 1950s didn’t appeal to me as much as the more distant world of the 1830s. Of course your mileage might well differ; if the 1950s particularly appeal to you, then this is definitely a novel you should consider picking up, because the setting is very well drawn.

And Josie’s backstory seemed well designed to drive interesting, appealing character development. And, though I know, I know, it’s silly to put too much emphasis on these things, I like the title and the cover.

Anyway, this is a story about a girl, a young woman, the daughter of a prostitute, who has grown up in the French Quarter and is now trying to overcome some fairly serious obstacles as she sorts out what kind of woman she wants to be – it’s very definitely a YA story, in other words. There is a romance subplot, but this does not occupy the front and center of the story. There’s a murder mystery, but this, too, is part of the story’s background architecture, a plot driver rather than the central focus. The actual plot is very much centered around the internal story of Josie growing up.

I selected this story from Audible mainly because I’d heard of it via this review by Heidi of Bunbury in the Stacks, which reads in part:

“I found myself for the first time in many many reads to be incredibly stressed out over the choices a character might make. I was so involved in this story, and yet, I found myself avoiding picking it up when we would reach a crossroads because I had so much fear for what was to become of Josie. The best part of Out of the Easy for me was the fact that my fears, though often justified, never took me in the direction I expected. Josie didn’t take the predictable path, nor the easy one, and in the end I came to see that it was the only path she could have taken to come out of the world she so longed to leave.”

And despite Heidi’s comment about not really getting why Josie felt so connected to Forest Herne (the murder mystery element centers around Herne), that wasn’t an issue for me — I was willing to accept that and let it stand as an important plot driver. I had other issues, but this wasn’t one of them.

I also listened to this book despite this review by Ana of The Book Smugglers. Which is surprising, because usually I’m pretty much right there when Ana spots a thematic problem with a story. But this time, when Ana says, “All the prostitutes there are portrayed as well-adjusted and moderately happy. You could also say they are all prostitutes with a heart of gold who have more of less have “adopted” the main character. … . All of these women … worry about Josie, want to protect her reputation and hope she will not become a prostitute – because they want better for her. Everybody thinks she is too good to be a prostitute …”

And I get Ana’s point, this would totally bother me, except I didn’t feel that this actually was the case. I didn’t see the whores in the story as “happy”, or at least not as well-adjusted happy women, but as damaged women making the best of a fundamentally bad deal – this may be because I can hardly imagine any woman choosing to be a prostitute in 1950s New Orleans unless she is desperate or damaged. But I will just state categorically that Evangeline definitely is not an emotionally balanced woman – and although Dora is nice, neither is she. (This leaves one other prostitute who is just hard to figure, since she does seem surprisingly well-adjusted — but I read this as a lack of information about her story, not as her actually being well-adjusted. I do basically think that all women are “too good to be prostitutes,” so it made sense to me that the people surrounding Josie thought she was too good to be a prostitute — including the women connected to the whorehouse. So again, though I had issues with this book, this wasn’t one of them.

Plus, though Ana found the presentations of class problematic in this story, I really didn’t. I would have really been annoyed if all the wealthy people in the novel had been presented as venal, hypocritical users; Josie’s friend Charlotte by herself wouldn’t have been enough to prevent that subtext, but actually I found the glimpse we’re given of Charlotte’s father does the trick. This may have worked for me because of the audio format, which is so slow you notice even very minor characters like Charlotte’s father.

Honestly, I don’t usually read a book so, I don’t know, so sideways to the way other people read it.

Okay, now, look. Josie is without doubt a character you can enjoy and sympathize with – intelligent and competent, yet grounded in the gritty reality of the French Quarter whorehouse where she lived as a child and still works (as a cleaning woman and general factotum of the madam). I definitely sympathized with Josie, who is torn between the strong friendships she has developed within the French Quarter and the deep, deep revulsion she feels against being perceived as the daughter of a prostitute. I imagine if her mother had been a different sort, Josie might not have felt such a strong need to get out of New Orleans and make a new identity for herself – Josie’s mother is, no joke, possibly the single worst mother in all of historical fiction.

Well, probably not, but you get the idea: the woman is dreadful. Not physically abusive, no, but vain, shallow, stupid, self-deluding, and pathologically selfish. You can totally understand how Josie can’t quite, quite bring herself to cut all ties with her mother – the woman is her mother, after all – but at the same time, you really wish she would just walk away and not look back. One of the lines I liked best in the whole book is when someone says to Josie, of her mother, “She was born without a compass like you have, Jo, so she’s always walking into all sorts of walls.” That’s probably not exact – audiobook, you know – but it’s close.

The woman who acts as a mother to Josie is Willie, the madam of the whorehouse – a curt, abrasive woman who isn’t nearly as hard-hearted as she pretends. A fairy godmother with the face of the evil stepmother, Josie thinks, and that’s exactly right. To me, I have to say, Willie was a little bit too much of a fairy godmother – a woman who can be expected to wave her magic wand and solve all your problems – and she sort of does, all the way through the story. THIS, now. THIS was the issue I had with the novel. In the end I did feel that Josie was prevented from having to make some of the hard choices she otherwise should have. Or more accurately, she was spared having to come up with her own brilliant solutions to get around the hard choices. This made Josie feel rather passive, when actually she is not a passive character. (Insecure, yes, but not passive.)

Yet, I liked Willie very much as a character; she was actually my favorite character; it’s really hard to imagine the book without her playing her important fairy-godmother role. But I would have liked Sepetys to find a way to both have her fairy godmother and restrict her ability to wave away Josie’s problems.

In the end, I’m going to weigh in on Heidi’s side on this one; Josie’s voice is believable and sympathetic, the setting and characters are beautifully drawn, the writing is lovely, I liked the thread of romance – Jesse is one of my other favorite characters and I’m glad this relationship worked out the way it did – and despite feeling that certain aspects of the plot were a little too pat, I definitely enjoyed Out of the Easy. I’m very likely to pick up another title by Sepetys one of these days — but perhaps not as an audiobook. The language was beautiful, a big plus for audio, but I would have liked to read this one much faster than the three weekends of driving it took me.