Okay, so far Merrie Haskell’s written three books: The Princess Curse, which I really loved, Handbook, which I enjoyed but not as much, and Castle Behind Thorns, which isn’t out yet but which is the most unusual and I think my favorite of the three.

If you’ve read it, you know that The Princess Curse is a retelling of the Twelve Dancing Princesses fairy tale, with a dose of Beauty and The Beast thrown in. It’s really charming and I definitely need to re-read it soon. I loved its protagonist, Reveka, right from the beginning; I enjoyed her thoughtfulness and how her view of the world expanded during the course of the story.

Castle Behind Thorns is a Sleeping Beauty retelling – did you see that coming from the title? – and a brilliant and unusual retelling it is, with exactly one character on stage alone for a third of the novel. I don’t need to tell you that the choice of telling the story this way put some unusual demands on the author. I loved the rough draft version of this story – seriously, on a scale of one to ten, I’d rate the rough draft as an eight and a half. I expect to rate the finished version, which I haven’t read, as a nine or nine and a half – practically perfect. (I don’t know when it’s going to come out, but I REALLY look forward to comparing the finished copy to the draft I read.)

Okay! In comparison to the other two, The Handbook for Dragon Slayers is fairy-tale-ish, but it is an original story, not a retelling. 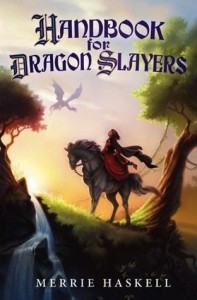 Handbook pulls in plenty of fairy tale elements – the princess, the nasty villain who wants to take over her lands, magic horses, dragons, the Wild Hunt (I’m a big fan of the Wild Hunt). What an adult reader will notice that a kid would probably miss is the depth of research that went into the book: a pfennig for your thoughts, for example, and the stories of saints killing dragons with the sheer power of their holiness, and tidbits like the mistress of the land owing servants one new dress at Christmas. We get a real sense of time and place here, unusual for fairy tale retellings, which I think more often draw on a more generic setting. The plotting is nice and tight, with minor characters introduced early turning out to play more important roles than is immediately obvious. I mean, I didn’t see the bad guy coming at all, or at least I totally didn’t expect his plans to include, well, never mind, but it was nice to be surprised. I enjoyed the way Haskell catches the ends of all her loose threads and pulls them together.

The protagonist, Tilda, longs for peace and quiet to read and write, but is constantly interrupted to deal with her responsibilities as princess; worse, Tilda was born with a deformed foot, widely considered a sign of a divine curse, which makes it harder to discharge her obligations and in fact harder to want to. I mean, when the servants make the sign of the evil eye when you go by, it’s hard to care very much about their problems, right? These are the pressures that drive the story.

I took longer to connect with Tilda than I did with Reveka in The Princess Curse, and in fact never liked her as well (though I did like her just fine, so don’t get the wrong idea here). On the other hand, her handmaid, Judith, was a wonderful secondary character – and I appreciated the clever choice to make Judith rather than Tilde a kind of apprentice dragon slayer. The relationship between Tilda and Judith was, for me, the best part of the book. The male lead, Parz, is a perfectly decent foil for the two girls, but definitely secondary to the two female characters. There is only the faintest hint of romance in the story, which is after all MG rather than YA.

This story starts off slowly, which is normally not a problem for me and which I didn’t mind this time, either. I personally like a story to take its time setting the scene and drawing the world, but I know not everybody feels that way. Then, about sixty pages in, Tilde gets kidnapped and gets away and everything kicks up a notch. We get dragons, and the Wild Hunt, and the magic horses, which of course I enjoyed, because hey, magic horses! And more dragons. I loved the dragons, but I don’t want to give too much away about them, so I’m restraining myself here. I will just say that they don’t quite think like humans and that the difference is important.

Thea and Ana from The Book Smugglers