So yesterday? The five hour drive to Indianapolis that I expected to take six hours because I usually stop two or three times to let the dogs stretch their legs?

Almost eight hours. Half of Hwy 70 was one long stop-and-go traffic jam. Most of the time I like my stick shift fine, but traffic jams that last HOURS are not those times.

I spent about an hour on the phone with my friend Deb; we were stuck about two miles apart, we eventually figured out. We’d each planned on having three hours or so before Puppy Sweeps started. Deb had the actual show ring materials in her SUV, so I’m not sure how they would have started the show without her, but traffic in Indy, once we finally got that far, was fine and we arrived with twenty minutes to spare.

But, just, wow. Never been in a traffic jam like that.

So, Honey in sweeps, youngest puppy by a mile, didn’t place but that’s okay, she is such a baby yet. She showed very nicely and had fun, which was all I wanted. Then I had to practice Rally obedience with the three older girls. I didn’t get done with that until after 10:00 PM. Plus I had to sound chipper and enthusiastic with them. “Chipper and enthusiastic” was pretty far from how I felt by then, let me tell you.

Rally started at seven this morning. Which in St L time is 6:00 AM. But then I woke up at 3:30 AM anyway and couldn’t go back to sleep, so that turned out to be fine. Time for a long long walk at dawn plus five minutes of practice for each girl. I didn’t really expect them all to qualify, especially Kenya, who I only entered because I thought showing in performance might boost her confidence level in the breed ring. Plus we’ve had trouble with the stand, trouble with the jump, only Giedre really gets the concept of the “stand while I walk around you in a circle and DON’T MOVE” exercise.

But Folly turned out to do her stand just fine. She didn’t do the jump, have to go practice that this evening, that cost her ten points, and I made a mistake with a sign that cost us ten more points, but we still qualified, though with a low low low score of 76. That may be my lowest score ever. She looked great, very fast straight sits and everything, she’ll do a lot better when she learns that jumps in the ring are just the same as jumps at home. Kenya didn’t do the jump either, no surprise there, but she did okay on everything else, earned an 85. Giedre did fine and got first place with a 95.

Then in the breed ring, lot of competition for Honey in the Junior Puppy class, nothing there, but again, by far the youngest puppy. Folly got second place in the Novice class, and I was very pleased when Kenya got second in her Special Limit Blenheim class because those were some very well known breeders in there with us, really top people who do a lot of winning. My Kenya did great to get second behind the Orchard Hill girl.

Then I took everyone out again, came back to the room, and collapsed for two hours. The girls wanted to wrestle at first but finally joined me in a serious nap. 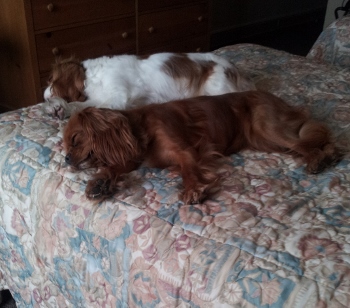 Writing status: on hold. Too tired.

3 thoughts on “Looong days, I swear they have more than 24 hours in them”