So, San Jose is a pretty big city in a central valley completely surrounded by volcanoes. You might have known already how very very very volcanic Central America is, but I really didn’t. If I ever learned how Central America formed, I had forgotten.

Of course I have every intention of reading about Costa Rican history — including things like geology — before going on the trip, but I didn’t actually get to it somehow. I will blame the need to thin the fruit on the fruit trees and all that kind of thing, but I admit that possibly I also spent time reading fiction instead of history. And then I had no internet access most of the time in Costa Rica and couldn’t just look things up whenever I had the impulse, which was annoying. It is certainly easy to get used to modern conveniences!

The tour director obviously was prepared for complete tourist ignorance and spent lots of time talking about history, including geology — she made it really interesting, in fact.

I knew (because of SM Stirling’s IN THE SEA OF TIME) that William Walker was a guy who tried to carve out a chunk of South America as his own private kingdom, but actually that turns out to have been Central America, including Costa Rica, which I hadn’t known. They fought him off. A very dramatic episode, I can see why Stirling stole Walker from history and used him in his book, though possibly using a character with that exact name was, um, less than subtle.

So, anyway, lots of volcanoes.

Lots of the volcanoes are active, too, and you can see plumes of smoke or steam or whatever rising off them, like here at Poas Volcano, which we walked up the slope of and looked down into: 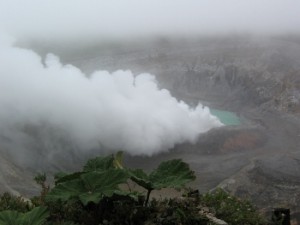 Caravan is very into tourist safety, as you might imagine, with a Be Careful Lest You Stub Your Toe On Uneven Pavement sort of attitude. I expect the whole country is into tourist safety in a big way, as tourism is, I think, something like the third-most-important component of the country’s economy. This results in a tendency to put up signs like this the one below: 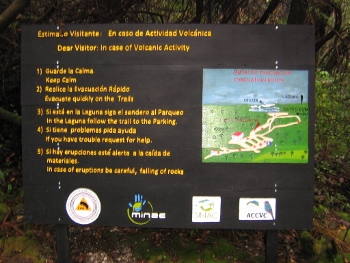 Can you read that? It’s all: In Case of Eruption, Stay Calm. Very entertaining.

In fact, it was hard to tell what was really dangerous and what was all about keeping tourists from stubbing their toes. We got these warnings about don’t-trip-over-this-rough-pavement and you could NOT get off a bus or onto a boat without the tour guide taking your hand to make sure you didn’t fall on your face or into the river. Which was actually kind of useful sometimes, as sometimes I was carrying enough stuff that an extra hand was a good thing, but it was still funny.

My favorite volcano of the trip was Aranel, a real volcano’s volcano, the classic conical shape and plumes of steam rising from its higher crater. It’s also the third most active volcano in the world, if I remember accurately the description given by our guide. Here’s Aranel: 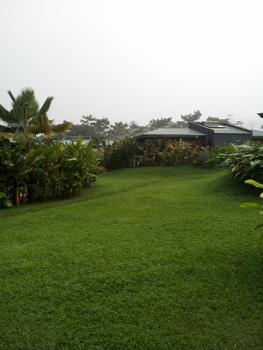 For a big volcano, Aranel was amazingly invisible whenever it rained, or whenever clouds and mist just closed in around it even if it wasn’t raining. We were lucky enough to see a lot of it, but unfortunately it was never clear enough after dark to see the famous orange glow around the top.

Costa Rica doesn’t just have volcanoes, it also has exciting wildlife! We saw this particular crocodile about one minute after starting down the river toward Tortuguero. 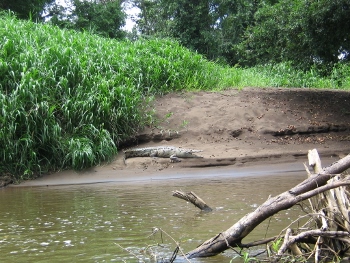 Costa Rican crocodiles are nothing like as big and dangerous as the monsters of the Nile, but they’re big enough. There are caiman, too, but those are smaller and basically pretty harmless, though I don’t know if I’d personally dabble my toes in a river that was home to a lot of caiman.

Tortuguero was my favorite place, I think. Kind of rustic accommodations, no air conditioning, but it was actually cool enough at night for that to be okay. And beautifully landscaped, though tropical plants look highly artificial to an eye trained in the temperate zone. I kept waking up at about four thirty, (because of the time difference that meant I was just waking up at my normal time.) So every place we stayed, I’d read until dawn and then wander around and look at flowers and birds. I really liked the kiskedee flycatchers, because they were everywhere, and pretty, and I learned to recognize their song, which made me feel more at home in the mornings. 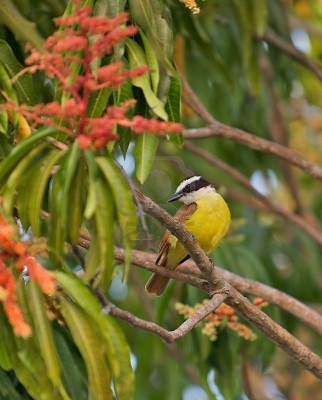 Of course, like everyone else, I most wanted to see monkeys – I mean, there was basically no possibility of seeing a jaguar, and not much chance of seeing a quetzal, so after those two, I really wanted to see monkeys. Costa Rica has four species. Of those, squirrel monkeys are ultra-cute but rare and we didn’t see those, but we did see lots of capuchins and howler monkeys, plus even spider monkeys twice, which was exciting, because spider monkeys are not nearly as common as capuchins or howlers.

Capuchins are cuter and howlers are more impressive, but spider monkeys have a more interesting social organization than either. I’m sure you’ll be interested to know that spider monkeys have a “fission-fusion” system, where a larger permanent association of animals breaks up every day into highly variable sub-groups and then comes back together. Other than in spider monkeys, you get that kind of system only in chimps, bonobos, and some kinds of dolphins (as far as I can remember, anyway). In order to get that kind of system, you need scattered and patchy food resources, plus mobility, plus a general lack of serious predation – conditions which are fairly rare for mammals. Plus, spider monkeys are one of the few mammal species which show female dominance, always interesting – that implies that that food resources are not so abundant that females can afford to give way to males and still successfully reproduce. 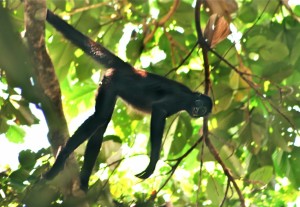 I was mostly interesting in seeing the animals and birds and the general scenery, but the towns were interesting, too. Here’s the tiny Catholic church in the village of Tortuguero. 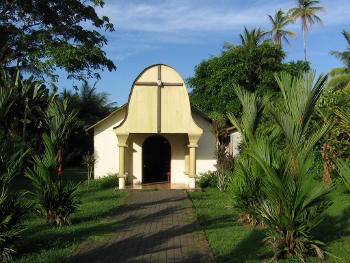 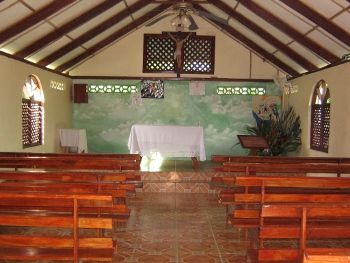 Isn’t that attractive? And the Costa Ricans are very good at landscaping everything that is the least big special, like even little bitty churches. I love those palms or whatever they are, which really do have bright red sections of trunk. I also took a picture of the inside of the church. The attractive design and pretty tile floor is characteristic of most every building we saw in Costa Rica – we saw few wooden buildings and even fewer carpets, I’m sure because of the humidity, but lots of lovely stone tile.

We traveled around a good bit and toured various plantations on the way from here to there. My favorite of the tours was of the Britt coffee plantation, even though I don’t like coffee (hilarious presentation!). Besides, they also make chocolate. My favorite was a dark-chocolate candy with guava-paste centers, not a combination I’d ever have thought of, but I bought a bag plus some tiny 1-oz samples to give away.

You know the way to a Costa Rican’s heart, btw? Establish a new tropical crop in their country! They will fling themselves into production with vast enthusiasm and make you almost a national hero. We heard all about the people who established bananas and coffee and pineapples and so forth. Not only was this all interesting (it really was), the whole forward-looking enthusiasm for new crops and new industry gives the whole country this great optimistic feeling. I honestly felt like all the tour guides and basically everyone in Costa Rica expects a bright future for their country. With an attitude like that, they may well build one. My personal vote for the next crop to try establishing: macadamias. As far as I know, no one has tried macadamias in Costa Rica, but if they can grow ‘em in Hawaii, why not Central America? And it’s plain the people of Costa Rica work very hard to make their crops a success. If I had an extra ten million dollars sitting around gathering dust, I might invest in that kind of venture, but alas, someone else will have to think of it.

Between tours and travel, we got to stay both on the Caribbean coast AND on the Pacific coast. Here’s my favorite part of the whole trip: 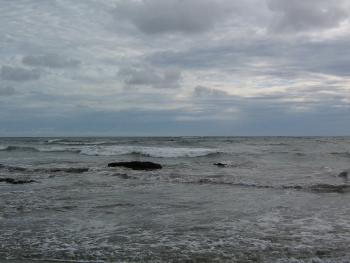 Those of us from landlocked states really find those oceans fun to play in. This beach had some volcanic rock, not fun to accidentally step on, but mostly it was sand and I enjoyed playing in the waves even though there was a huge and very attractive pool. And collected a few small volcanic rocks to take home, because hey, rocks! If I put them on a shelf with my extra 2000-colones bill (about 4 dollars), I’ll remember where they came from and why they’re special. 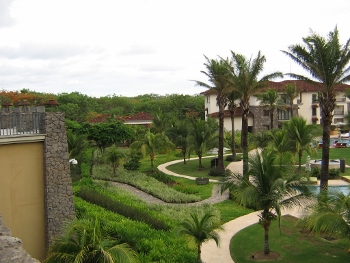 So that was Costa Rica! I’m leaving tons out, of course, but I did get some great photos even with my cheapo camera, and I’m sure various people will email me a selection of the pictures they took, too.

I’ve been in the tropics before – Kenya while I was in college, and I did research in Venezuela one summer – I was watching bearded sakis, which was a) fun in some ways, but, more importantly, b) a useful demonstration that I was never going to like research enough to make it my life. I mean, if you don’t truly love doing a behavioral study on monkeys in the tropics, you are probably never going to love doing behavioral research period. So I went in a different direction with my life.

Anyway, this was my first trip just for fun, and I thoroughly enjoyed it. Though I missed my girls! Maybe for my next vacation – preferably in fewer than twenty years – I will google Amazing Vacations For You And Your Dog, and take a couple of them with me!