By Allie, over at Hyperbole and a Half.

Now, an intro to this post, if you like: Several years ago, I read Peter Kramer’s AGAINST DEPRESSION. Kramer’s a psychiatrist, as you may know, and if I were suffering from any kind of emotional dysfunction, I would probably find out what state he practices in and move there, because his books are amazing.

In particular, AGAINST DEPRESSION persuaded me that clinical depression is a real illness with definable characteristics, that it destroys lives, that antidepressants are crucial lifesavers, and that depression is a huge medical problem. I mean, did you know that depression is so tightly linked to heart disease that it would be one of the biggest killers in the world EVEN IF it was as emotionally neutral as high blood pressure? I mean, who knows that? I had no idea.

One thing I didn’t ever suffer from, though, was any idea that depression somehow offers valuable insight to the tragedy of the human condition, or anything ridiculous like that. I don’t get the “tragedy of the human condition” thing, see. I certainly never, ever granted any credence to the idea that art has to be dark in order to be deep, or that somehow depression grants its sufferers some kind of moral superiority to the healthy. Not hardly. So Kramer’s first chapters were interesting to read, but mostly I found myself saying, Do people really think that depression is alluring and morally uplifting? (Apparently many people do.)

Plus, Kramer’s book made me VERY GRATEFUL that my own family apparently has the great good luck to be genetically protected against depression. It’s a huge extended family, offering plenty of data points, so I’m pretty sure about this. I remind myself of this piece of good fortune when feeling snappish about early-onset osteoarthritis and semi-herniated disks and whatever.

So, so. Evidently Allie suffers, or has been suffering, from a form of depression that Kramer would identify specifically as anhedonia — the inability to feel pleasure in anything. Also a more global flattening of all emotional states. Her post is amazing. With amazing cartoon illustrations. Such as:

I had so very few feelings, and everyone else had so many, and it felt like they were having all of them in front of me at once. I didn’t really know what to do, so I agreed to see a doctor so that everyone would stop having all of their feelings at me. 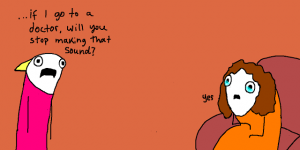 It’s a wonderful post, one that gets about as close as I can imagine to actually expressing what it feels like to be clinically depressed — a very alien emotional state to those of us who fortunately never experience anything of the kind. And here’s hoping that Allie soon writes another post, one in which she illustrates the phenomenon of complete recovery.

5 thoughts on “A fascinating post about the experience of depression —”