Okay! Anybody think the first book, WIDE OPEN, was a tad predictable? I did. It didn’t bother me, because I was reading for the characters and dialogue and setting, all of which were so good that I didn’t care that it was super-obvious that Martin was the bad guy.

But in DEEP DOWN? We still have the characters and dialogue and setting, but the story is also less predictable. I did guess what was special about Lily and Beth, but not much more than that. Several details took me totally by surprise! 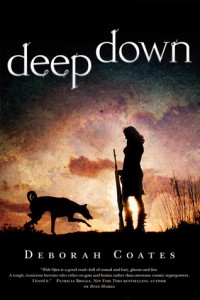 In DEEP DOWN, we have two subplots that sort of look like they’re separate, but they actually tie together as the story progresses. We get the thing with the black dogs, that are not, of course, dogs at all — they’re harbingers of death, and they talk. At least the one that hangs out with Hallie talks. Still not clear why this particular black dog is hanging out with Hallie; I think we have a lead in to the third book, here. Which is fine. I like the black dogs and look forward to seeing them again.

So, anyway, the thing with the black dogs and reapers and a personified Death — I always do enjoy a personified Death — and the thing with the spooky bad guy, Travis Hollowell. Who is indeed pretty spooky. And, as I say, turns out to be involved with all those black dogs and reapers and everything, and in fact it all even ties together with the magic we saw from the first book.

One thing I really like about this story: the way there is ALL THIS weird spooky stuff going on, so that every time you turn around you bump into somebody else who can foretell the future (sometimes) or talk to dead people (if they’re in the right mood). Usually these are not comfortable gifts; they are small and not very helpful and sometimes actually pretty dangerous, but they do turn up. And yet you can totally believe that most people don’t notice the weird supernatural stuff that goes on behind the scenes, because Deb Coates is really good at showing how ordinary people just don’t want to notice or acknowledge the weird stuff.

There was something about the way [Boyd] said her name, about the way he entered a space, whether she was looking at him or not, like the air changed, like he figured she would always know that it was him. And maybe she would. Like a dance without music. Like they almost knew each other.

He paused, like he was figuring out what to say next, a problem they both had, not just because they didn’t know who or what they were to each other, but because the subject of their conversations kept being things neither of them had ever heard of or knew anything about.

I could quote so many great bits! It’s all so much more interesting and evocative and somehow real-sounding than the way the Female Lead thinks about the Male Lead in your typical paranormal/UF kind of story. Hallie and Boyd argue, and stop themselves from arguing, and protect each other, and stop themselves from protecting each other, and it’s just a really great developing relationship. We learn a lot more about Boyd in this book. He really does suit Hallie down to the ground. There’s this neat bit where she says, “You’re not my type,” and he just says, “Yes, I am.” And of course he’s right, and she knows he is. It’s like, there’s this great relationships that’s rocky and sometimes tense, but without the angst that gets so tiresome in so many romances.

So, yeah, this one worked for me. Plus, that beautiful cover! I’m definitely looking forward to the third book.

1 thought on “Recent Reading: DEEP DOWN by Deb Coates”