Whew, what a weekend! I didn’t work on any of my own projects because, see, it’s finally warmed up, and the soil’s not too wet, so I started this project, building a low terrace to slow down runoff down this slope. Of course I plan to plant shrubs up on a low (very low) berm along this area and then run a path in front of the shrubs, once I’ve got things set up so the path (it’ll just be mulch) won’t get washed away. 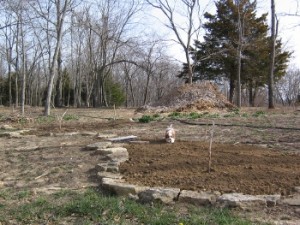 Anyway, I want to see if any of the many bayberry suckers are rooted enough to transplant and use, but if not, I have some deciduous hollies on their way, so I’ll use those.

And then I sprinkled a lot of seeds out: Nolana, vinca, phacelia, poppies — various things. After which it hasn’t rained. It was supposed to rain. Very annoying if I have to go water this huge area tomorrow morning before work.

ANYWAY, after all that I deserved a break, right? So I read Martha Wells’ WHEEL OF THE INFINITE. Just finished it. You know what? It may be my favorite of hers. At least, it’s right up there. But hang on a second, because let me mention CITY OF BONES first. As it happens, these two books make a great contrast.

I read CITY OF BONES last week and it was fine, I liked it a lot, but out of the ten Wells’ books I’ve read so far, it is my least favorite. Don’t let that put you off if it’s already on your TBR pile, though, because I eventually figured out what was bothering me about it and it wasn’t a quality issue. It was this:

CITY OF BONES gave me claustrophobia.

I don’t mean literally. I’m not actually claustrophobic. And there were no tiny little dark places involved. No, it’s the whole society in CITY OF BONES; it’s so closed-in and limited, and not in a good way. You’ve got these cities surrounded by a desert wasteland — worse than a normal desert, all these poisonous predators, and deadly ghosts, and in fact there are also cannibals that specifically lie in wait for travelers. So normal people can’t just stroll into the desert, right? And of course most people can’t afford to travel with a well-armed group because they are crushingly poor because of how the society is constituted. And what that means is, nearly the whole book is set in this one city with a despotic elite crushing the great mass of citizens (and it’s worse if you’re a noncitizen). So there you are if you’re a normal person in this city: struggling to make a living, with virtually no safeguards from thugs and thieves and whatever, and with way too many people above you who can kill you at a whim, and you can’t leave.

Don’t want to leave you with the wrong impression: the ending is fine. The bad guys mostly get what they deserve, and so do the good guys, and it’s fine. But still.

Interesting tidbit about CITY OF BONES, though: we have a male main character and a female main character, and there is no romance. Occasional sexual tension, but no romance. When’s the last time you saw that in a fantasy novel? I wonder if Martha Wells intended to put in a romance and then just couldn’t? Because truly it would not have suited the two protagonists to fall in love with each other. She was completely right not to take that obvious path. Of course if you really strongly prefer a romance in your fantasy, this would count against the book; but I thought it was great to have these two people not suit each other and basically realize it and pretty much not go there.

So, all this is an interesting contrast to WHEEL OF THE INFINITE.

In WHEEL, we do have a (understated) romance. But you know who is involved? One of the very, very few mature woman protagonists in fantasy. The only comparable protagonist I can think of offhand is in Bujold’s PALADIN OF SOULS.

Maskelle, from WHEEL, is about as far from a swooning young girl as you can imagine. She is powerful and sure of her power — for various reasons she has areas of insecurity, but she is basically able to move through her whole world without being physically afraid of, well, anything. That is just about unique for a female character in fantasy.

That Wells manages to give Maskelle serious obstacles to overcome despite this set-up is pretty amazing, but she does, of course, or else there wouldn’t be much of a story. But I loved Maskelle; and I also loved Rian, the secondary protagonist; and I loved the way they fit together so perfectly despite being from such different societies — in fact, Rian was really set up, because of his background, to need someone like Maskelle. And vice versa, actually, since Maskelle was carrying a little too much baggage from her backstory to easily build a relationship with someone from her own society.

And what a difference between Maskelle’s society and the one in CITY OF BONES!

The Celestial Empire is open, peaceful, civilized, beautiful, and above all spacious. No claustrophobia here!Plus, it is clearly based physically on a country such as Thailand: tropical, with breadfruit growing in people’s gardens and a very serious rainy season. I love the physical sense of being there Wells gives us with her fabulous descriptive ability — and I love that being there would be actually fine. The Celestial Empire sounds like a great place to visit, and not at all a bad place to live. So long as they don’t accidentally mess up the cosmic balance of the entire — well, never mind.

I still do have Wells’ new YA, EMILIE AND THE HOLLOW WORLD, to read. And her two Stargate tie-in novels. Other than that, well, I look forward to seeing what she writes next — and re-reading my favorites in the not-to-distant future. So far, out of all of Martha Wells’ books, I still love the Raksura trilogy the best. But I think WHEEL OF THE INFINITE may be second, possibly before even The Fall of the Ile-Rien trilogy.

How about you? If you’ve read Martha Wells’ backlist, which one is your favorite?

And let me add just one current picture of the baby. Yes, she climbed in there by herself. 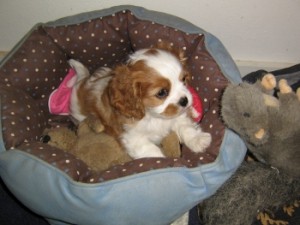 12 thoughts on “Recent Reading: City of Bones and Wheel of the Infinite.”