So what is it about modern epic fantasy that makes authors insist on showing us the pov of really unlikable characters?

To be fair, I actually did enjoy THE DRAGON’S Path, which as you may know is the first book of an epic series by Daniel Abraham. It’s very well written, as you would expect from Abraham. 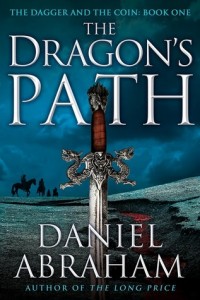 But you know? I’ve liked Abraham’s other first-books-of-series too, and yet I haven’t ever picked up the second book of any of his series. That kind of says something right there, doesn’t it?

The problem is, even if I really do like many of his primary characters, and even if they improve (come to understand themselves better, increase in competence, commit to an important goal, whatever) — as I say,even if they improve over the course of the book, there are always enough grimdark elements to push me away from other characters and from the book as a whole.

In THE DRAGON’S Path, we have:

a) Marcus, a mercenary captain. I like him a lot, I truly do. He is interesting. He very much thinks outside the box when necessary, which it often is — this is mostly because he is a captain without actual troops, so he has to improvise. And I like his backstory and how that influences everything he does. Abraham has a deft touch, weaving all that history in without you really noticing: no info dumps here. There’s no doubt at all that Abraham has the chops when it comes to writing.

b) Cithrin, a young girl who was raised by a bank (yes, really) and understands banking right down to her toes, but is not the least bit used to the real world. I like Cithrin . . . mostly. I like competent characters, and she sure does understand banking. But she has a self-destructive streak a mile wide and a really tough time handling setbacks, and those are two characteristics that go very badly together. At this point I am flinching from the second book because I’m afraid of what situations Cithrin might get into — and because I’m convinced that whatever nasty situations those are, she will have got into them herself. I really like the father-daughter relationship that grows up between Marcus and Cithrin, though; that’s more interesting than the romance I expected, and Abraham handles it really well.

c) Master Kim, who is extremely cool. I love Master Kim! He runs an acting troupe, and I don’t want to say too much about this whole subplot, but I loved the acting troupe and everything about it! (Well, almost everything.) Master Kim is very definitely a secondary character compared to Marcus and Cithrin, though; those two are the primary focus throughout. But just let’s take a look at the rest of the pov lineup:

d) Geder, a totally ineffectual, incompetent character we are supposed to feel sympathy for, as he bumbles into becoming a horrible tyrant sort of by accident. I mean . . . my sympathy ran out even before he BURNED ALL THOSE PEOPLE ALIVE. To be fair, at that point I don’t think Abraham imagines we will still feel much sympathy for Geder. But, yuck, can we NOT spend time in his head, ever? (I know he is doing it to show us plot developments we would otherwise not know about, but still, yuck.)

e) Lord Kalliam, who is totally committed to supporting the monarchy and keeping those damned upstart peasants in their place. Let the lower classes think they can run their own lives and who knows where it will all end? Lord Kalliam is written in a sympathetic way that is interesting, but you are constantly jarred out of the story because how can you really have sympathy for a guy who thinks like this?

f) Lady Kalliam, his wonderful wife, who everyone is going to love, but nothing about her can make up for her husband — plus she is a very minor character.

Compared to GRR Martin, Abraham almost counts as light and fun. Compared to Joe Abercrombe, well, there’s no comparison! Marcus really is admirable and competent, and you can root for Cithrin even as you roll her eyes at her. And Master Kim, seriously, very cool guy.

But epic fantasy today — I mean, is there ANY modern epic fantasy where we are not forced to spend time in the pov of several evil characters? And ineffectual is almost worse than evil, it’s so painful to read! Both ineffectual and evil at the same time, and, well, not rushing out for the second book.

So . . . I was in the mood for epic fantasy, but now I think I’m over that for a while. Next up: something lighter.