But yesterday? You have no idea. I came home and found my new puppy shivering, even though she was on the warm side of the whelping box, and she had lost half an ounce. Scary! 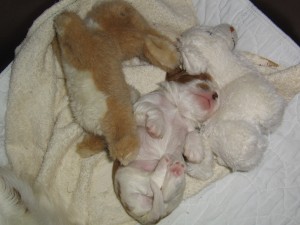 The shivering reflex isn’t even supposed to have turned on yet. She’s only sixteen days old today, and they say two and a half weeks before the puppy can raise her body temperature by shivering. Glad Puppy H beat that, because she had plainly gotten chilled, and that made her lethargic and she so she quit nursing, and you can see the vicious cycle coming, I expect.

Anyway! I warmed her up and mixed up some formula and tube-fed her and four hours later, after a little detour into doing worse, she was doing much better. But you know what I did for those four hours? Because there was no way I could do anything involving actual thought, right, because do you KNOW how many things could go wrong that would BE WORSE than just getting a tiny bit cold? That would just kill the puppy and there would be nothing to do about it? LOTS OF THINGS. And you can’t tell for sure what’s wrong until the puppy either starts to improve or goes steeply downhill.

So I re-read FAIR GAME by Patricia Briggs. Even reading my brand new copy of FROST BURNED was too much!

So, whew, another deep breath, today should be fine.