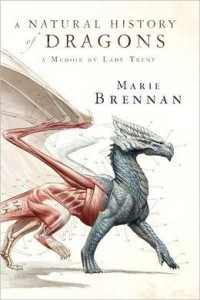 A fabulous cover, right? Or is that just me?

What a pleasure this book is, from front to back. This is one you really should get in paper, because it’s beautifully designed. How did Brennen manage to luck out with internal art? I didn’t think publishers EVER put artwork in any adult fantasy, I though it was a MG perk, but no! We have lovely pencil drawings all through. And the pages are sort of rough, like you might see in a book written during an earlier era. Honestly, it’s just marvelous attention to detail — kudos to Tor for bringing out such a lovely book.

Now, this is not as “big” a book as I really expected — It covers Isabella’s childhood (fairly briefly), her “Season” in London (briefly) (not called London, but I forget what the city is called), her marriage (briefly), and her very first expedition, with her husband, to study dragons (at some length). Yet she’s writing it from way in the future, when she’s an old woman, and all through there are implications that she later made very important discoveries that had a huge impact on her society and on the world. We barely get a glimpse of what some of those discoveries might entail, and in fact the hints given in this book might be misleading, that wouldn’t surprise me at all. But the effect of all those hints is to make this book read like the first in a series. Not that there’s a cliffhanger or anything, but there’s so MUCH room to go on. There’s no hint in the book that a series is planned, but I sure hope so, because I would LOVE to see more of this world and of Isabella’s later adventures!

I said the city isn’t really London, right? Well, it won’t surprise you to know, given that Brennen also wrote MIDNIGHT NEVER COME and that series, that it might as well be. Isabella is plainly growing up in England, called Scirland, and this first expedition of hers is set in what is for all intents and purposes Eastern Europe somewhere. Somewhere fairly recently conquered by an analog of Russia, so think Poland, that’s probably about right. Brennen does a great job capturing the flavor of the English (or Skirling, whatever) countryside, and then of the Eastern European village.

If you’ve read MIDNIGHT NEVER COME, which I just did, I would say that Isabella is a more immediately sympathetic protagonist than either of the protagonists in MIDNIGHT (though they grow on you). Also, this book moves more quickly, and the protagonist’s first-person voice is really appealing. Isabella describes her leading characteristic as “deranged practicality” — which pretty well describes her occasionally, um, less well-considered actions, and also how she gets out of the sometimes startling situations those actions get her into.

As it happens, I’ve been dipping in and out of a book called Camps and Trails in China: A Narrative of Exploration, Adventure, and Sport in Little Known China, by Roy Chapman Andrews, which is in fact exactly the sort of book, for real, that Brennen’s A NATURAL HISTORY purports to be. Andrews, who collected for and was I think the curator of the American Museum of Natural History, was writing in the 1920s. And as it happens, he traveled on these expeditions with his wife, Yvette. It’s really entertaining to see how Brennen captured a similar tone for Isabella, compared to Yvette’s real journal entries, which are sometimes quoted by her husband.

It’s also entertaining to see how Brennen nods to modern sensibilities: on Isabella’s expedition, they kill ONE dragon for study, and she defends this to her readers. On a REAL collecting expedition, such as Chapman’s, they kill LOTS of animals, with an eye both to study and to museum displays, only of course Chapman doesn’t feel the need to defend this at all. And one could in fact wish for a little more sensitivity to the natives on the part of Chapman, whereas naturally during her expedition, Isabella learns to respect the native people.

I don’t mean to imply that any of this is heavy-handed or anything. Brennen did a great job weaving this story together so that it would appeal to modern readers, have a smooth and complete story arc, and yet remain true to the tone of a turn-of-the-century scientific expedition. It’s just that reading one of Chapman’s books at the same time really highlights how different modern sensibilities really are, from those of the previous era.

So, anyway — a beautiful book, a fine story, what’s not to love? If you enjoy fantasy, then I’m sure you’ll enjoy this — and if, like me, you happen to particularly enjoy the (rare) intersection between natural history and fantasy, then you MUST pick this up. A real paper copy! You won’t regret it.

3 thoughts on “Recent Reading: A Natural History of Dragons”