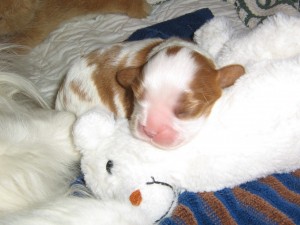 Okay, so! I don’t think one puppy update per week is overdoing it, right? I’m calling this a semi-cute picture because I know very well that the REAL cuteness doesn’t start until the eyes open; another two weeks or so. (Maximum cuteness is between 5 and 10 weeks, imo.)

You’ll be glad to know that Puppy H is doing pretty well! She is up to 11 1/2 oz today. She was quite slow to start gaining weight and even now tends to hit stretches where she quits gaining or even loses a little. I’ve been supporting her with 3-4 cc of formula to get her going again, a couple of times per day. That is not very much. A ten-oz orphan puppy would be getting 10 cc of formula six times a day, so you see that six to eight ccs total in one day is truly not very much. Even so, I sure don’t want to discourage Kenya from producing milk, so I think tomorrow, instead of formula, I will try using dabs of glucose to punch up the baby’s energy level if she seems to be slacking off on her job of nursing.

Anyway, she’s looking nice and plump. Even if I have to continue with the formula, there’s no real reason to expect that to be a big deal. It’s amazing how soon you can start a puppy on real food if necessary, though usually I don’t bother offering real food till I’m pretty sure the puppy will be enthusiastic; eg, about five weeks. That’s pretty late to start a puppy on real food, but hey, I’ve never had my one- or two- or at most three-puppy litters be a big drain on their mothers.

Public service announcement, btw: a puppy may be weaned at five weeks, but it is NOT ready to leave its mother and littermates until SEVEN weeks at the VERY EARLIEST. Not that it can’t work out, but you get more psychological problems in puppies re-homed too early; very predictably. Problems with bite strength (they bite too hard) and seperation anxiety and lack of ability to socialize with other dogs properly. If you know how and you’re quick about it, you can teach a baby about bite strength, but they ought to learn that from their littermates, not from you. The anxiety thing, eh. Puppies are just not psychologically prepared to leave their mothers that early.

Plus, any breeder who would sell a five-week-old baby is either ignorant or indifferent, possibly both; not the best person to buy a puppy from.

Plus, honestly, I don’t expect my puppies to be all-the-way weaned until they’re six or seven weeks old. Cavalier mothers are usually pretty tolerant of their bratty offspring, and I’m not going to separate them to force the issue. They’ll all be weaned eventually, so as long as the mother’s in good condition, what difference does it make?

Number of times I’ve lifted Kenya off her baby when she sat on her: twice. Three times if you count the time she rolled over on the baby’s head and didn’t seem to notice. How the mother can be that oblivious, I’m not sure. Even the quite muffled cheeping of the sat-upon puppy can wake me right up. This is one big reason that I sleep in the puppy room.

Number of times I’ve rescued the puppy from the wrong side of her mom and put her back on the milk-producing side: four.

Number of times I’ve dropped a towel on top of a cold and cheeping puppy: lots. At least six dozen times over the first 72 hours? Seriously, something like that. Less often now. A puppy without littermates to cuddle up with is a lot more liable to chilling. The baby is becoming less susceptible to cold now, as she puts on body fat and also as her ability to control her own body temperature improves. Plus she can creep around like anything, which means she can reach the warm side of the whelping box when she needs to.

Two more weeks till she’s really safe from chills! This is the other big reason I will be asking my mother to keep a close eye on her when I go back to work (Friday).