Plus, a minor (well, probably no more than medium-intense) rant about photographers who don’t know their subject. Which, I know! Is not the author’s fault. You don’t have to tell ME that, right? Nevertheless.

I like the cover design. I really love the scrollwork down the sides, which you can’t really see in the picture — you have to tilt the book back and forth to see it. It’s really lovely. But the dog! It’s just painful. Look: 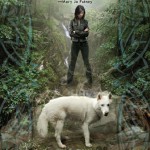 Sorry, but I know too much about correct dog structure and about what REAL Siberian huskies look like. This dog has got quite a German shepherd head. Either it’s a very poor example of a Sibe or else it’s a white German shepherd or shepherd mix.

Worse, it’s standing in such a way that its structure looks all wrong. Probably it’s not as poorly put together as it looks, but its stance makes it look as though it is wheelbacked, over at the knee, too straight in the front pastern, and poorly angulated in the rear.

This dog looks like it would have a tough time with endurance and be prone to injuries to the front pastern and knee, especially moving over rough country. If it really is wheelbacked, it will also be prone to injuries of the spine. If it’s hunched up because it wants to stand with its hind legs this far forward, then it probably has a problem with slipping hocks, slipping patellas, or hip dysplasia — some joint issue that is making it try to carry its weight in its back. If it does that for long, again, it’s going to be liable to spine injuries. Moving this dog’s hind legs back by eight inches before snapping the picture would have enormously improved its appearance.

For comparison, here is a much nicer Siberian, posed in a good show stack: 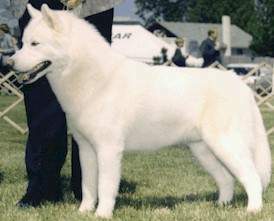 Just in case you happen to want to take a great picture of a dog, let me just add here that the way to pose a dog so that it looks great even in a natural setting, is to make sure its rear legs are set well back and its topline is straight. You may want to set its front feet up on a rock or log to exaggerate the smooth slope of the topline. You may want to get the dog to point its nose down slightly so that its neck is arched. I’ve certainly got my girls to pose standing that way, just so they look as fabulous as possible.

This photo here is a cheat in some ways, because the snow conceals so much of Pippa’s legs. But her stance is clearly four-square and balanced, and her topline is gorgeous. Take a look: 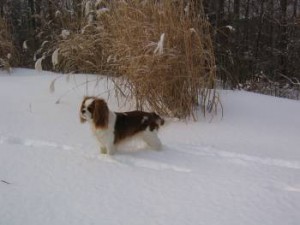 Pippa always takes great pictures because her structure is excellent. The dog on the cover of Still Life — well, who knows? Maybe it was just caught at a really unfortunate instant. What a shame the publisher’s photographer didn’t ask a dog show photographer for advice!

So, okay, onward (at last!) to the actual book!

First, is that a great title or what? Seriously. I LOVE that title! I know I always seem to focus on titles, but seriously, titles are hard and this is one on my favorite titles EVER. Clever AND evocative.

Now, how about the book itself?

I figured, since I started by providing Goodreads reviews for the first book, I’d do that again for this one. Here’s the second review in the lineup. It is a four-star review.

Posted by Lisa on Nov 13

“I was one of the people who really, really disliked the first book in Shinn’s shape-shifting series. I feel that Shinn’s particular brand of romance doesn’t work in a modern/real-world setting the way it does in fantasy or science fiction; reading about women or men who will die if they can’t be together makes me roll my eyes. So I went into this book expecting little to nothing, after the dissatisfying tale of Maria and Dante and a relationship I thought bordered on the emotionally abusive.

I’m delighted to say how wrong I was.

The story of Melanie and Ann, sisters who are equally devoted to each other, was wonderful. Yes, there was romance that went a bit too far for my liking, and a plot point (leftover from the first novel) that made me shake my head and wonder if Shinn had forgotten where she’d taken us the first time around. But the book was touching, and I adored the protagonists. And in this book, I feel like she’s branching out and finally touching the wider world of shifters. The first book didn’t feel like a set-up to a series, but this one does. I almost wish this one had come first.”

I think this review is really accurate. It’s perfectly true that borderline-obsessive devotion is a whole lot less disturbing between sisters than between lovers. Particularly when the older sister has taken a maternal role toward her much younger shapeshifter sister. We expect a mother or older sister to pull out all the stops when defending a child / younger sister, right? I actually like both Melanie and Brody quite a bit.

I do disagree about one thing, though: I definitely didn’t think there was “too much romance” in this book, as the reviewer above said. In fact, I especially loved the fact that Melanie wouldn’t admit to herself that she was actually dating Brody. And if anything, there was too little shown of the romance between William and Ann — but then, Ann was not the point-of-view character.

And I’m not sure what this reviewer had in mind as a possible forgotten plot point. Having thought about it . . . still not sure. I can’t think of anything that struck me that way.

The interaction between all the characters was good, and in particular I loved some of the secondary characters, especially Debbie and her family. My favorite scene was probably the dinner party at Debbie’s house. The discussion about superpowers? That was so funny! (The superpowers are things like “being able to find keys” and “knowing who the phone is going to be for”, and the idea is not just funny, but also completely crucial to the plot.)

I really enjoyed Ann (the shapeshifting sister). I totally believed in her — in how she acted. I could see why Melanie couldn’t accept the risks her sister was taking, but I thought Ann’s decisions were right for her. And Melanie’s were right for her. I love irreconcilable dilemmas, which is exactly what we had here.

In fact, I really appreciated this unique take on shapeshifters, in which being a shifter is actually a pretty terrible thing in lots of ways. It doesn’t give you superstrength and supersenses and supersexiness and a hot temper and a special pack to belong to — it isolates you and messes up your ability to have a normal life and has serious, sometimes very serious, effects on your health. Though in STILL LIFE we start to see a larger shapeshifter community, which I think could be developed into something that would act as a real support system for shapeshifters. Which they could certainly use!

Yet for all that, I honestly preferred the first book. This was a real surprise to me, but it’s true. I preferred Maria to Melanie — or more accurately, I preferred reading about Maria to reading about Melanie. Maybe this was because Maria started off in such a questionable place psychologically and then wound up in such an improved place, so there was a lot of development over the course of the book. Or maybe it was because I liked the more intense, faster-paced plot of the first book. Or maybe it was because . . .

Okay, the subplot in STILL LIFE? The one where Janet is the pov protagonist, in a plotline only tangentially related to Melanie’s plotline? Janet goes into science, see, and studies shifters scientifically. And that is a problem for me.

See, it’s not just that I know a good bit more than average about canine structure and function; I also know quite a bit about genetics. For me — and I know this won’t be a problem for most readers — reading about the “science” in this story was as painful as looking at the dog on the cover. As a public service, let me suggest that the following terms should never be used by anybody who doesn’t know anything about genetics:

“Dominant”. The word already has a specific meaning in genetics, and this wasn’t it. This makes the third completely different wrong way that I’ve seen this word used in the context of genetics — people also often use it to mean “common in the population” and dog breeders use it to mean “homozygous”, and everyone should cut that out and look up the actual real meaning. Or just not use the word.

“Gene”. Genes absolutely do not and cannot work in any way similar to that depicted in the story. Please don’t use a pseudogenetic explanation for anything magical. It’s painful to those of us who do know how genes work.

But, with the appalling state of science education in this country, I doubt very many people are going to have trouble with the (pretty tiny) amount of fake science in this story.

Okay! “Science” aside, I do plan to get the third book, whenever it comes out. I am longing to know how things are going to work out for Dante and Maria and their extended family, which now in a certain sense even includes Melanie. And! I STILL think Caroline has evil mind control powers. I hope we eventually find out what is going on between her and Grant!