Only there are so many, many great Whelan covers, how can you choose? We have at the moment specific votes for Rawn’s dragon cover on SUNRUNNER’S FIRE: 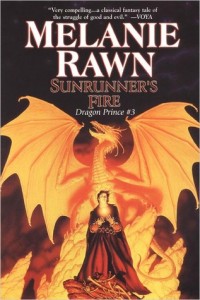 And the one for Friedman’s BLACK SUN RISING is certainly great: 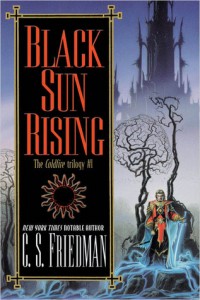 Though it’s a real shame so much of the art is covered up by that big black square. And for me this one is overly stylized. Or maybe I mean overly formal. That straight-on pose, I don’t know, it’s not my favorite way to pose the figure. Not that I think a pose needs to be active. I don’t mind that. But it looks to me just like this guy is in fact posing for a heroic painting by some famous painter, and I’d rather have a pose that suggests the artist caught him in a moment of his actual life.

Of the three Whelan covers mentioned in the comments, my favorite is this one:

I love the exuberant quality, the flung-wide arms that seem to embrace the whole sky. I haven’t read the book. In fact, I haven’t read any of these three books. Are they good enough to match their covers? (Not that I need more books on my TBR pile.)

But of all Whelan covers ever? Cherryh has some GREAT Whelan covers — on her Chanur books and on her Foreigner books. Any I love Whelan’s covers for The Dragonrider of Pern series. For dragon covers, I would vote for those. But overall? From all possible Whelan covers? I vote for the Little Fuzzy covers, including this one: 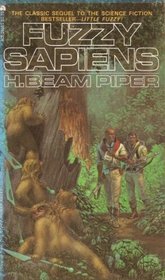 I just think the Fuzzies look wonderful. It’s so hard to make teddy bear aliens look real, but I think Whelan pulled it off. Cuter than Cavailer puppies and carrying those keen little spears! Cute, and yet they might actually be competent to survive in those woods. BTW, though I really enjoyed H Beam Piper’s original Little Fuzzy books, and Ardath Mayhar’s contribution from the Fuzzy point of view (Fuzzy Dreams, I think was the name), I haven’t read Scalzi’s recent re-telling of the story. Which is unique in my experience; has anybody else ever retold an older SFF writer’s story? How did that even come about? Anyway, I have no urge to read the Scalzi version, unless some of you have and you think it was great?

Also, while on the subject of covers, I found these two non-Whelan covers interesting — one was mentioned in the comments of the previous cover post and the other I own; I was struck by how similar they are. 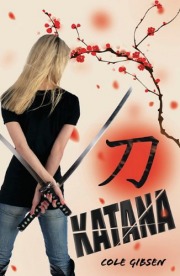 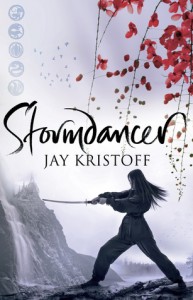 I love both of these covers. But is there a thing where you MUST put red flowers in the upper right if doing an Oriental-ish cover? Girl with sword and flowers? Of course red is supposed to draw the eye.

Also, in case you see the covers and fall in love and wonder about the book? I haven’t read STORMDANCER (is it good?), but KATANA isn’t bad. It’s got some very nice snappy dialogue, but I found it a little disappointing. This may have been caused by inaccurate expectations. It’s sold as girl-gets-possessed-by-spirit-of-Samurai, and while this is accurate, I had in my head the idea that we would see this fabulous culture clash between a modern American teenage girl and the possessing spirit of a traditional older male Samurai warrior. No. The possessing spirit is that of a young female Samurai warrior. Not only was I disappointed, I slammed into the idea of a young female Samurai warrior with total disbelief and never recovered. But I can see how YA readers might like it better the way Gibson wrote it.