Literally, in fact. We’ve had several unseasonably cool days (lows in the sixties, highs in the low eighties). Not that this was accompanied by rain or anything, but it’s been nice to have the windows open. And a chance to take some of the dogs hiking! As far as they’re concerned, that’s what cool mornings are FOR.

Now, Pippa and Adora have to be on leash every minute, because WHOA, SQUIRREL!

But Dara and particularly Kenya don’t, because they stay right with me and ignore the squirrels. Kenya in particular never gets more than twenty feet away before turning to make sure I’m still coming. And I noticed something funny: she always turns the same way and takes the same pose. Check it out: 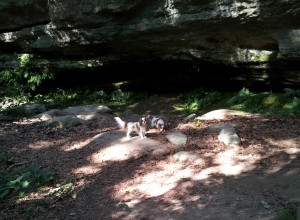 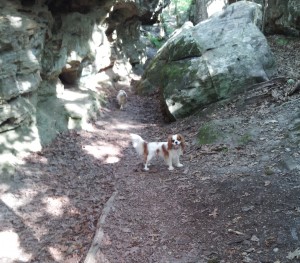 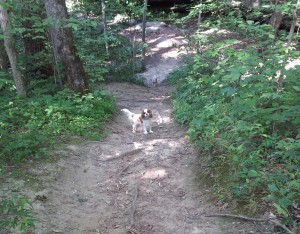 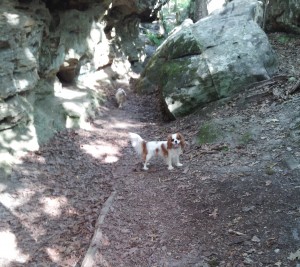 Doesn’t it look like I was just carrying around a Kenya statue, and every now and then put it down, backed up, and took a picture? I found this endlessly entertaining and took lots more pictures, but don’t worry, this one representative sampling is all I’ll post. I do seem to have become a convert to the overwhelming snazzyness of having a camera in my phone.

Alas for us all, it was seventy degrees already at nine this morning — more than likely that means the AC late this afternoon or at best tomorrow. And no more hiking for a while.

Now! In other news!

Not much to say about the WIP. It is progressing, slowly. It’s meant to be progressing slowly right now; done with the big push after all, and I don’t want to kill myself. I’ve got this cool scene in mind, but I won’t touch it till maybe Sunday — I want time to work on it uninterrupted, so I left it for now while I work one other bits.

Oh! Good news, though: I did figure out the main role of one secondary character, so I guess she can stay in the story. I was worried she might have to be written out. I have one other character like that, so we’ll see what turns up for him, if anything.

Also! I’m reading EMBASSYTOWN. China Mieville sort of intimidates me: you have to pay attention to his books when you read them. Don’t you think? Kind of the antithesis of a comfort read. Anyway, EMBASSYTOWN is up for the Hugo and Nebula this year, and since I get to vote in both, I figured I ought to read at least some of the contenders. And I already had this one because I really loved THE CITY AND THE CITY. I think I’m not going to like EMBASSYTOWN as well, but I could see voting for it.

AMONG OTHERS by Jo Walton has been on my wishlist since last year, but I don’t have it. I guess I should get it at this point. It’s the other one that I think would appeal to me. DEADLINE by Myra Grant? No way. I enjoyed it — I really did — but vote for it? I had some MAJOR plot issues with it, which I kind of ranted about over at Goodreads, in fact. And the other nominees don’t really sound like my thing. Well, A DANCE WITH DRAGONS would, sure, but I’m not voting for a fraction of a huge series. Plus I’m not reading it until the whole series is done, anyway.

You can see a list of the Hugo and Nebula nominees (and get lots of the novellas and short stories that were nominated) here, btw, if you’re interested. I would never read the short stories if they weren’t offered free online, because basically I just don’t do short stories. I don’t mind novellas, but I sure won’t go to any trouble to track them down, so a (perfectly legal) site that links to online copies (with the author’s permission) is definitely a good thing.