My goodness, is it ever hard to write when you have a super-cute single puppy! It’s true that Puppy G plays with her “older sister”, Folly, but she’s not quite able to keep up with Folly yet, so I have to fill in as a kinder, gentler, slower playmate.

Which is a total hardship, let me tell you. 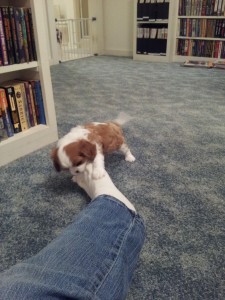 I’ve registered her, finally. That means I had to decide on a show name, which is indeed Anara Give Me A Break. I’ll probably call her Giedre later, when she looks elegant enough to deserve a name like that, but right now she is just Puppy. I mean, there’s only the one. Not like I need to be able to distinguish her from a horde of others.

Also! Gardening, right? I mean, there’s all this stuff that won’t wait. Mind you, after a burst of summer back in March, it’s now too cold to plant the hot-season stuff (phooey! Tired of cold weather!). But there’s all kinds of other stuff to do. Moving the Kerrias finally. Making Kerria cuttings after cutting back the ones I moved. Planting my very first rhododendron! If it lives maybe I will get more. Planting the new, tiny ‘Butterfly’ magnolia — it’s not even knee high. Planting a bunch of nandinas. That horrible weedy strip next to the house looks so much better now that it’s been filled up with nandinas! I have little ones in the front (they should get three feet tall) and big ones behind (five to eight feet). Can’t wait for them to fill in. What a great plant. How could it have taken me so long to plant them?

Also! Moved a bunch of rocks to make an ornamental flow of rocks across this one area out back. Found four (4!) little ringneck snakes and one earth snake and two skinks. 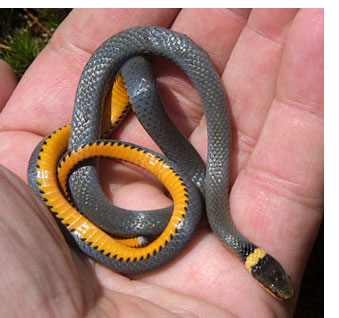 It was totally tiny cute reptile day! Ringnecks never bite. Neither do earth snakes. You just pick ’em up and drop ’em over the fence. To protect them from the dogs, you understand.

But when it’s finally dark and the dogs are all miraculously asleep? It is actually possible to turn on the laptop. I’ve finally adjusted to the new machine (pretty much) and so I don’t accidentally resize the text anymore. Well, not very often. I never did consciously figure out what I was doing to make that happen, but the back of my brain seems to have got it sorted out because it’s nothing like as annoying a problem as it used to be.

So! 2000 words (or so) of a new project. About four pages a day. Which is very good considering a) the puppy, and b) the gardening. Plus, c) school isn’t out so there’s a big chunk of each day gone, right?

Which, no, I don’t want to talk about the new project. Later, like next year, maybe. I will probably — best guess — take it to about 20,000 words and then let it stall, because as soon as it does I have a different project I should be working on. But hey! Not on a deadline, so “should” is a relative term and I can totally switch back and forth if I feel like it. But I will feel awfully embarrassed if I fritter away the whole summer and don’t have a new ms finished by, say, September.

Plus my YA editor at Knopf made suggestions about reworking MOUNTAIN and I think I will probably try to do that, but not right away. Going to let that rest a while (like, months rather than mere weeks), get a little more distance, come back to it when I’m not bored just thinking about it.

This evening — weeding! Playing with Puppy! And THEN, we trust, another few thousand words.