And by “all Easter”, I mean of course all weekend. Lessee. No little kids, so no Easter egg hunts (I do regret the lack of small children around holidays, but there you are — though I’m sure the dogs wouldn’t mind if I hid sugar eggs for them. Or liver eggs!)

Anyway! Planted the new astilbes that just arrived — I want to create a river of astilbes down the dry stream bed beside my house.

That stream bed continues around the corner of the house and right down through the yard, past the fence and down the hill. The rocks turn from nice pretty round manicured rocks to big rough boulders, because luckily a neighbor has a small bulldozer which we used to move really big rocks into place just after the house was finished.

I’ll take a picture of the astilbes when they’re up, though they’ll be small this year. Also I thought about what else to plant down along that stream bed, but of course thinking doesn’t count. Plus the nursery accidentally sent me a Chaenomeles ‘Cameo’, which is not what I ordered. Naturally they’re sending the shrub I actually ordered and naturally they’re allowing me to keep the flowering quince, which I am not a huge fan of flowering quince, but if I were going to get one? It would in fact be ‘Cameo.’ So I wandered around looking for a place to put it and finally planted it over to the side of the flowers bordering the orchard. If it’s happy there and looks nice, maybe I’ll get a couple more to keep it company.

I moved the poor little climbing hydrangea vine. Its tree died. For no reason at all. Just poof! Dead. A hickory, maybe thirty or forty years old. We’ve had the odd tree die for no reason before — a couple really big hickories and a few young oaks, like thirty years old, and two perfectly fine willows. Sometimes mysterious things happen. But why to a tree where I planted a somewhat tricky and very slow-growing vine? That was just unfair. Luckily the vine is young, but it hurt me to cut off all its tendrils and hack it out of the ground. I hope it survives and recovers and starts up its new host tree. It’d be nice to see it flower before I die of old age.

But I can plant a new tree where the hickory used to be! That part will be fun! But what? A dove tree? A silverbell? A kousa dogwood? Maybe even a paperbark maple? Choices, choices . . . my life is so tough, having to narrow down the list to just one! Maybe there’s room around the place for all four if I just walk around and stare at the landscape long enough?

But doesn’t this give a great sense of space? We’re moving the pathway that used to run through this area because obviously the Vinca minor vines are eating the old pathway. Dad built that gazebo.

Check out the other side of this area as you come around my parent’s house: 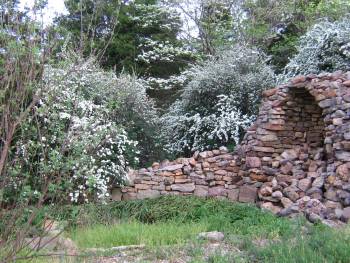 These spirea? They’re ordinary Vanhoutte spirea, an excellent choice. These particular shrubs are cuttings off the bush that my grandfather planted for my grandmother when they got married. Isn’t that something? I took several more cuttings this spring to extend the white white white blizzard of flowers down farther toward the pond.

Back over at my place, I dug a bed for the kerria cuttings I made last year. I’ll move ’em as soon as they stop flowering or next week, whichever comes first. Love those things. Hard to complain about a really easy shrub that puts on a show you can see from 100 feet away! I have plans to make a lot more cuttings ASAP, which is why the established cuttings need to move. I’ve got the ordinary double, ‘Flora Plena’, I think. 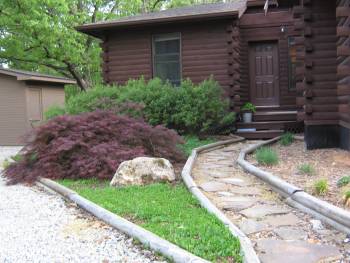 The low-growing stuff in front will produce white upward-facing flowers soon, and the daisies behind the Japanese maple will flower any day now, and I should take another picture at that point because it’s going to look great! Especially with all the weeds out!

Got all the big weeds out of the butterfly garden in the dog yard, too. Much quicker to write that sentence than do it, I assure you. The butterfly plants are out there not so much for me but for the critters, which is why the yard gets called the dog yard rather than just the back yard. I don’t worry about holes getting dug out there or whatever, either. Cavaliers love chasing butterflies, hence the butterfly garden is out there. Also! Transplanted some butterfly bush seedlings that were not in a convenient spot. Now re-mulching the whole area (also takes longer than you’d think) and thinking about adding a few more butterfly plants out there. Not sure what. Thinking’s cheap. The buy-it-now list tends to shrink when I look at the actual prices of plants.

Tied up the peas in the veggie garden.

That’s a polyantha rose in the center, ‘Marie Pavie’, a fabulous pale-pink highly scented rose that appears to be entirely immune to rose rosette, because man have we lost a lot of roses to rose rosette. But not this one.

Also spent time snarling about the weather, which was fabulous but is predicted to turn chilly and thus I am prevented from planting the summer seeds — squash, melons, okra (I like okra, okay?), beans. We’re supposedly at risk of a frost tonight. I trust it won’t happen. There’re thousands of baby apricots and cherries and plums and peaches, so frost would be bad. Luckily we’re up on a hill, so in fact we should stay a few degrees warmer than down below. Plus baby apricots are tougher than you’d think. We’ll see!

And ALL THAT is why I did not touch my computer all weekend! So no writing taking place just now! After the major gardening push or after school gets out, I promise I will get back to work! On something . . .

6 thoughts on “I spent all Easter gardening —”