Is a book I wish I’d written! 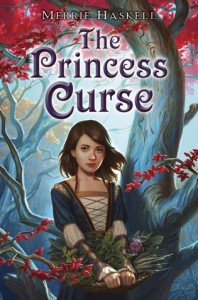 What I did not know when I ordered her novel, which just came out (at last!), is that it’s a Twelve Dancing Princesses retelling and a Beauty and the Beast retelling (to a lesser extent, though). I wish I’d thought of that! If she’d asked me to name my two favorite fairy tales, well, there they are. (Really. My favorite version prior to this was Robin McKinley’s short retelling in The Door in the Hedge.)

Plus the Eastern European setting, with Vlad Tepes in the background? How cool is that, right? And I happen to know that Merrie really did her research on Eastern European dragons when she was writing this book, too. I must admit, I don’t remember how to pronounce “zmeu”, even though she pronounced it for me several times.

I didn’t know anything about THE PRINCESS CURSE when I ordered it, except I’d seen the cover. And I knew that Merrie had written this hilarious short story, which is the only other thing of hers I’d ever read and has a line in it that I would love to steal. The one about “having six more beautiful dark eyes” — seriously, go read the story.

Well, THE PRINCESS CURSE was even better than I’d expected — I really want to quote bits, but it would be a shame if I gave away all the best lines. Plus there are a lot of great lines so it would take too long. I did laugh at the “It is a curse of shoes and naps” which everyone is quoting, but there were lots of great bits.

By a startling coincidence, Thea over at The Book Smugglers posted her review just a day before I read this one myself! She does REAL reviews, not like me, so — go read that, and what she said.