Okay, sorry, I didn’t take a camera, but the most fun costume at the masquerade?

The MC (Vic Milan, who did an awesome job) announced “The grouchiest pirate on the seven seas!” — who turned out to be Oscar the Grouch in a pirate outfit. Great costume, great performance, it was unexpected and hilarious and the audience (including me) roared for at least five minutes before Vic could continue his narration.

The performance wound up with the announcement: “Brought to you by the letter “P”, without which a pirate would be merely irate.”

I thought Oscar would win! But he didn’t, though I’m sure that costume won an award. (I hear the winner was a much quieter but very impressive Senator Padme from Star Wars.)

Most interesting comment during a panel . . . we were doing a panel on YA and YA audiences, and of course the subject of do-boys-read-YA came up and we were talking about how if a cover looks like a romance, then even if the main character is a boy, what boy would ever be caught dead reading it?

And a member of the audience pointed out that with e-readers, no one can see the cover.

Well, of course that’s perfectly true. That’s a potential advantage of e-readers that never occurred to me. Though I hope e-readers never cause readers to devalue the artwork of the cover, because I do love a beautiful cover.

Oh! Something else! Check this out:

This is one of two new Benjamen January novels!

I didn’t know Barbara Hambly had those out. The original publisher dropped the January series, which horrified me because I LOVE that series! So I am very pleased Severn House picked it up. I should mention that though DEAD AND BURIED got a starred review from Pub Weekly, it’s very very short, like 250 pages, and the next one is not much longer. Just so you know. I’m about halfway through it now, though, and really enjoying it, and it was certainly worth plonking down the ten bucks or whatever even though I hardly think it’s a real novel if it doesn’t reach at least 300 pages.

And! Patricia Wrede’s old book, THE SEVEN TOWERS? Out as a nice new hardcover with a very pretty cover: 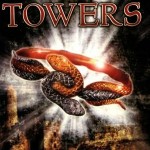 But I already have a perfectly serviceable paperback, so I didn’t buy it. Glad it’s out again, though, it’s a charming book and deserves to be brought again to readers’ attention.