If you like rain. And severe thunderstorms. And more rain. And yet more thunderstorms. Poor Adora has been afraid of thunder ever since the big hailstorm a few years ago, which to be fair really did sound extremely dramatic. Now when we have thunder, she climbs on me and cowers. At night, if the thunder is really bad, she crawls under the covers, which is not normally something I permit any dog to do. Poor baby. Here’s my favorite picture of Adora: 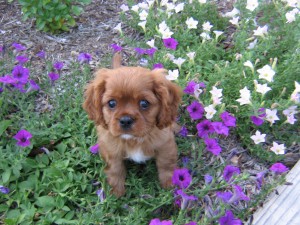 Of course, she is a good deal older than that, now. She is from the first litter of puppies I ever bred. Nearly four years old now. How time flies.

More storms tonight, I hear. Well, at least no other dog of mine is afraid of thunder, which is just as well or it would get pretty crowded in the bed on stormy nights.

You know what else rain does? Makes it impossible to plant new shrubs and perennials outdoors. I spent my Easter transplanting three winterberry hollies, a Calycanthus ‘Venus’, and a pearlbush up into large containers. If I can’t plant fairly soon, I’ll have to pot up the Echinacea, Solidago (goldenrod), and various other perennials up as well. A lot of extra work which would be totally unnecessary if it would just quit raining!

Also got two baby pawpaw trees this spring — those’ll be interesting. Luckily I enjoy watching babies grow up, otherwise I’d probably not bother planting something that will take five or six years to bear when I don’t even know if anybody will like the fruit. But they’ll be interesting, and if we all turn out to hate the fruit, I’m sure the raccoons will eat it.

Odd year for the real fruit trees! I sloshed through the orchard this morning and took a look at every tree. Of course, every year is odd in some way, but I’m stunned that the apricots have some fruit on them, even after our low of 27 degrees when they were flowering. Who would have guessed? The peaches made it through the cold, too, but the Japanese plums aren’t going to bear this year. The European plums will, I think, but honestly I like the Japanese plums better.

Plenty of cherries this year for Dad! No one else in my family likes cherries, so just one tree.

This year, it looks like the Fuji, the Pink Lady, the Goldrush, and the Honeycrisp are going to bear well. Not the Hokuto, but you can’t have everything, and after all it bore last year. Even the pear is going to have fruit, even though its partner was replaced last year and the new replacement isn’t big enough to flower. The neighbor’s kieffer pear must have provided enough pollen for limited fruit set, even though the kieffer is 100 yards away at least.

Always exciting watching the trees come along in the spring!

But I would be delighted if we didn’t get ANY rain in May.