It’s been an intense month, as Adora’s litter turned out to be one premature half-sized little puppy who embarked immediately on a roller coaster: He’ll be fine! Wait, I think he’s going to die! Oh, whew, he’s okay. No, what? What? Aspiration pneumonia?

Aspiration pneumonia happens when a neonatal puppy breathes milk into his lungs, and it is always very serious.

Well . . . after putting the poor little guy on every safe and at least one risky antibiotic and tube-feeding him every four hours around the clock . . . he got better! And then he aspirated again and died anyway. Didn’t quite make it to four weeks old.

So that was brutal and explains why I haven’t been updating my website. I was hoping for better news when I got to it, you know?

Plus I discovered — I bet this won’t surprise anybody — that a violent emotional roller coaster is not conducive to writing! I got almost nothing done over the past month, other than dusting the whole house and becoming a world-class expert on tube-feeding tiny puppies.

In happier puppy news: Bree’s puppies, at least, are fine! Nothing cuter than five-week-old Cavalier puppies. Here’s her little boy puppy, and the two little girls sleeping in their ‘den’. I’m keeping both girls, at least long enough to see how they turn out. 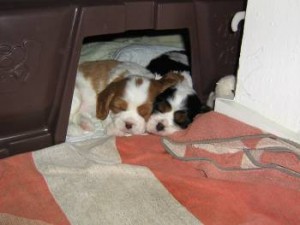 People ask me, Isn’t it really hard to sell a puppy and let it go to a new home? And the answer is, No, not really, as long as you’re perfectly certain the new home is excellent. It is way, way worse to lose one after his eyes are open and he starts to have a personality. It is just fine to send one away as long as you get happy notes back from the new owner about how perfect and great the puppy is!

So I have these two stories started, you know, and wasn’t really able to work on either of them over the past few weeks. That’ll change, and I’ll pick one soon and get some major writing done. Why else arrange to be so very, very part time in the summer except to have time for writing? But first!

I’m kinda thinking of working the whole dying-puppy thing into a novel. So it wouldn’t be a total waste, you know? And as kind of a memorial to the one who didn’t make it. I trust that doesn’t strike anybody as stupidly sentimental. (If it does, keep your opinion to yourself.)

I kind of think I know what I might do as far as the plot goes, more or less, and I have this kinda snazzy setting in mind, so I think maybe I’ll see if I can’t write thirty or forty pages of that first and then think about which story to actually finish. I will turn the puppy from a spaniel into some other kind of creature . . . maybe a griffin (not a fire-griffin, though! Different world!). And, I promise you, he will SURVIVE. Depressing endings, faugh. Bad enough in the real world.

So, anyway, after the puppy died, I made a large plate of The Best Cookies In The World and got out a book I’ve been longing to read (The Hunger Games, by Suzanne Collins, which I was saving to read until the third book came out, which it isn’t yet, but August is close enough) and read the book and ate all the coookies. The book was perfect for the occasion. Absorbing story, you know, and all the characters have way worse problems than I do, which at the moment I really appreciate. I totally get why this book garnered such raves all last year! I read Catching Fire, too, and now I’m dying to read the third book. Can’t wait to see the evil Capital pulled down. I hope all the good guys survive to dance on its grave, or at least all my favorite characters, because seriously, I am in the mood for happy endings.